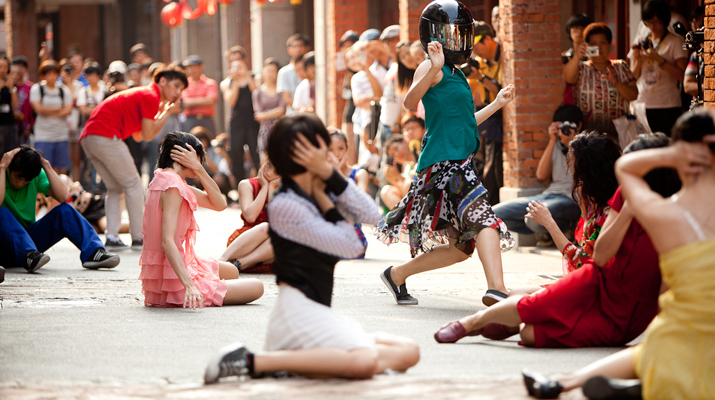 The American premier of [1875] Ravel and Bolero, created in 2006 by Shu-Yi Chou, a rising young choreographer from Taiwan, is set for October 2 and 3 at New York City Center. In 2009, the work won first prize in the first online Global Dance Contest launched by the renowned Sadler?s Wells Theater of London. In January 2010, Chou led 12 dancers in two performances of the piece at Sadler?s Wells, to enthusiastic ovations. Chou and his dancers were invited to make their United States debut at the seventh annual Fall for Dance Festival in 2010 at New York City Center. Among 20 companies performing at the festival, they are the only dance group from Taiwan.

Shu-Yi Chou choreographed the work in 2006 based on the collective life experiences of his dancers and generated through improvisation. It has gone through several adaptations, continuously nourished by Chou?s personal experience performing and choreographing in residency programs worldwide as well as his subtle observations and reflections on contemporary urban life. Like the well-known music of Ravel?s Bolero itself, with its seemingly endless repeated main melody, the dancer radiates enormous power via perpetual variations. Mirroring everyday life, it can be routinely regular yet also constantly changing. In each performance, the inner journeys of the choreographer and dancers are revealed. Time had the illusion of passing but, at the same moment, accumulating. The audience is granted the opportunity to contemplate and relive every step in life in the guise of dance moves, their every spin and fall.

This title denotes the year Ravel was born, and associates it with the last composition in his life. The four numbers represent a year and also symbolize a secret code of life from which the birth and rebirth of creation can be deciphered. Images of life are revived through the bodies of young dancers. The same metaphor is applied to costume design and stage decor. Shu-Yi Chou rummaged through floral pattern dresses in the closets of mothers and aunts. The design, contrasting the retro style with youthful bodies and a backdrop of green grassland, brings back the memories of the good old days. It creates an ambience of nostalgia. The dancers express their gain and loss, sorrow and joy by daily movements and abstract body language. They demonstrate their simultaneously conflicting emotions by making a shouting gesture as though they are taking a ride on a roller coaster. Impervious to the surrounding screams that come one after another, a female dancer wearing a red floral dress smiles to herself. In Chou?s words, it is like a flower in a meadow that has to stand out and be beautiful by itself, and this situation of playful teasing is actually representing powerful life force. He choreographed many falling movements, in order to show that life is like journeying into undulating mountains, whether small or large, and what we need to learn is how to get up again and again to stride forward and face the changing scenery optimistically.

Shu-Yi Chou has won major dance prizes. He is a star of contemporary dance in Taiwan who has received enormous international attention as he makes his mark on the global stage. His creative career as an independent choreographer began in 2003. Starting with body movements, Chou continues to challenge his own creative conceptions and attempts to incorporate diversified performing modes. His works were twice selected by New Idea Dance Showcase hosted by the National Theater and Concert Hall in Taipei. In 2004, his work, Street Lamp, was selected by Cloud Gate 2?s first Seed Choreographer?s Project and won the golden medal of Taiwan?s National Creative Dance Competition. In the same year, he joined the Horse Dance Theater. In 2009, he was sponsored by the Asian Cultural Council and Taipei Artist Village and joined the residency programs in New York and Paris. He was granted the Luo Man-Fei Dance Fellowship in 2008 to present his solo work, Start with the Body. In 2010, this piece won the 3rd Cross Connection Ballet International Choreography Competition in Copenhagen, and in August he was invited to participate in the Internationale Tanzmesse NRW, Dusseldorf.