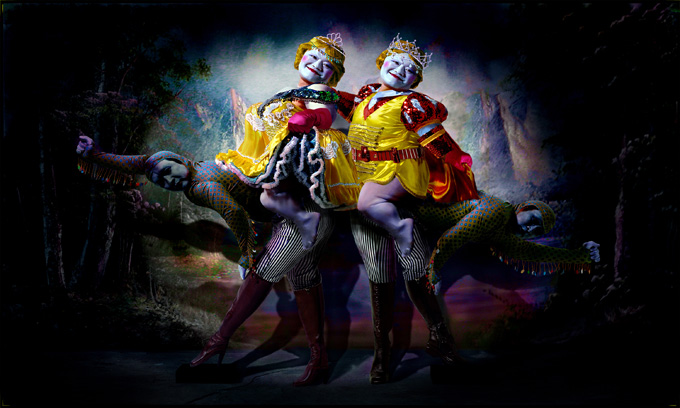 Wu Tien-Chang is a leading photographer in Taiwan and internationally. His work is a glamorous surreal world bathed in offbeat, unnatural hues. His weird, humanoid beings lack limbs or sport broken arms while riding bikes triumphantly. Or, stranger still, clowns row a boat while walking on stilts. Where does this circus come from, and what is the point?

Wu says fear or terror and the exterior appearance are central to his compositions. He says: ?I try to express a sense of insecurity?. He reflects the fragility of life, the paradox of a society of law and corruption and the precarious political status of Taiwan in relation to China, which claims the island.

Growing up in Taiwan?s folk culture with many magical features is part of his DNA. Wu especially likes the circus. He is attracted by sparkling surfaces that mask uncertainties. Gaudiness emerged in both China and Taiwan in the 1990s along with an affluence new to both societies. Wu believes that gorgeous surfaces cover the dark, rotten and dead and he feels a bizarre sexual tension in society. Thus he masters the dialectic of superficial and hidden, real and unreal, fact and fiction. He says he is trying to ?translate the untranslatable? and express ambiguous aesthetics.

Wu was trained as a painter, and he composes in an academically classical manner. Posing his models, he takes as many as 100 small photographs to build his composition and then uses digital technology to manipulate his creation. His digitally-created ?paintings? challenge the traditional concept of painting just as his computer-massaged photographs challenge traditional photography.