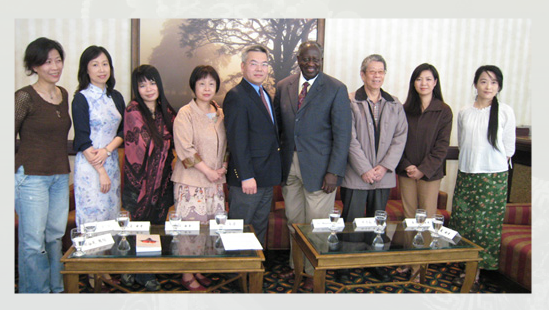 For the first time ever, Taiwanese writers will be a presence at the International Conference on the Short Story in English, to take place this year at Toronto's York University from June 16 to 19. Six Taiwanese writers?Ching-Wen Tzeng, Ang Li, Suh-Fen Tsai, Wenyin Chung, Ying-tai Chang, and Belinda Chang?were invited to attend the conference. Besides, there will be a special reading held at the Burrows Hall Branch of the Toronto Public Library to allow the local community to appreciate their works. The reading will be on June 20th at 2:00 pm.

The first International Conference on the Short Story in English was held in Paris in 1988, after which it has convened every other year over the past two decades. This year will be the 11th meeting. The goal of the conference is to promote the short story, provide a forum for emerging and established writers to showcase their works, and to encourage the further development of the short story form. In the years since its inception, the conference has become a well-respected literary forum, drawing a distinguished array of writers and scholars from all over the world, including Pulitzer Prize-winning authors Robert Olen Butler and Richard Ford. At this year's meeting, the six Taiwanese writers will join other international writers and scholars in readings and discussions themed around "The Border as Fiction," exploring the rich, multifold significances of borders geographic, political, social, cultural, and linguistic.

Ching-Wen Tzeng has written novels, short stories, and works for children. His writing depicts the everyday joy, pain, and dignity of the Taiwanese people. Against the backdrop of rustic village-life and the modern commercialized society, Tzeng explores of the fates of social classes in their endless cycling flow and focuses a close lens on human nature at its most basic level. He is a deft wordsmith, expressing himself with a language simple but pregnant, plain but sweet. In 1970 he began writing books for children, hoping to instill in children a sense of imagination. Tzeng has been honored with numerous awards including the Kiriyama Pacific Rim Book Award (renamed as Kiriyama Prize) in San Francisco. His short-story collections Three-Legged Horse and Magnolia have been published in English translation.

Ang Li's works include essays, short stories, novels, biographies, literary reportage, and children's literature. With sharp, incisive brush strokes, she pierces society's strictures and taboos, dissects social problems, and lays open the hearts of her characters to reveal a collective reflection of our era. Delving into rich subject matter with great technical skill, Li produces works of literature that are each unique and distinct. Her works have been translated into numerous languages: The Butcher's Wife has been published in the United States, the United Kingdom, France, Germany, Japan, the Netherlands, Sweden, Italy, and Korea; Garden of Riddles has appeared in French and Japanese; Autobiography: A Novel has been published in Japanese, Dark Night in French, and The Visible Ghost in German. In 2004 the French Ministry of Culture and Communication awarded her the "Chevalier de L'ordre des Arts des Lettres," its highest recognition of literary achievement.

Suh-Fen Tsai is a novelist and short story writer. The critic Pang-yuan Chi has praised her rich language and depictions of life. In works such as The Child of Salt Pan and The Olive Tree, Tsai creates a new kind of native Taiwanese literature; in Sisters she tells a tale of marriage gone wrong through letters exchanged by two sisters. Audaciously exploring fresh themes and charting new literary terrain, Tsai has distinguished herself as one of the most daring Taiwanese women writers of the nineties. She has been awarded numerous honors in Taiwan.

Wenyin Chung is a novelist, short story writer, and essayist. For many years she has written on the subjects of love and family history. She is also an ardent traveler and has traveled in five continents over the past decade. Her fiction exploits the connection?sometimes real, sometimes false?between memory and reality, and contemplates the predicament of human existence and the nature of fate. Her essays consist mostly of travel writing and personal reflections. A prolific writer, she is considered one of the most outstanding fiction writers to emerge in the late nineties. She has received numerous national recognitions of literary achievement in Taiwan.

Ying-tai Chang is a writer of fiction and essays. Her works depicts the daily lives of the ordinary Taiwanese and are often written in the first person. She is good at using the stream-of-consciousness and lush prose which evoke a magical-realist atmosphere. She has been awarded a lot of prizes in Taiwan.

Belinda Chang, a novelist and short story writer, explores the subtle complexities of the modern woman's psyche. She writes stories based upon her life experience in the US and China. She has received some awards in Taiwan.

Since 1990 the Council for Cultural Affairs, Taiwan, has been promoting the translation of Taiwanese literary works from Chinese into other languages, in the hope that the political, economic, cultural and social aspects of Taiwan depicted in literary works can be vividly presented to non-Chinese readers in a language familiar to them. Up to date, about 220 volumes of creations, critiques and histories of Taiwanese literature, of which 144 of them are in English, have been published outside of Taiwan. We hope that the Taiwanese writers invited to attend the conference will, through dialogue with other writers and scholars and through interaction with the local community at their book reading, gain a broader Canadian readership, build a web of connections with writers and scholars from around the world, and become members of a global community, thus increasing opportunities for English translation and publication.