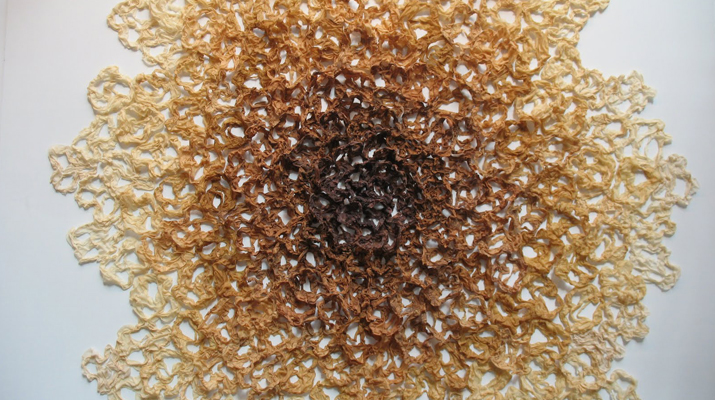 New York Taipei Cultural Center is pleased to present "In-Between", an exhibition devoted to the work of Wei-Hui Hsu.

"The more I stay away from home, the more I miss it. The more I stay in the U.S., the more I would like to return to my own cultural background and bring it into my work.", Wei-Hui Said. She creates a series of work "Far From Home Series" which expresses her feelings about being a foreigner who is traveling and residing far away from home. It explores cultural identity and cultural differences. She covers various found objects with Chinese brocade which symbolizes herself and serves as the metaphor for her cultural background and Taiwanese female's appearance. She covers her suitcase, dictionary, SUV with Chinese brocade. She also creates her artwork with ham and toast. Through the humor, she expresses herself in the western society. Her work includes mixed media, indoor/outdoor installation, and photography. They convey her contradiction between the Western and Chinese Culture; between masculine and feminine; between tranquility and vagrancy; between reality and dream; between restriction and release; between conflict and compromise...

She makes full-scale installations as well as smaller mixed-media pieces. Her work has been exhibited at Museum of Contemporary Art in Taipei, Shanghai Art Museum, Beijing Today Art Museum, Museum of New Art in Detroit, and other alternative spaces and galleries in Taiwan, China, Korea, the United States and Canada. She was awarded the Merit Award in fine art from the Creative Quarterly Magazine, and she also won several grants and awards from Joyce Dutka Arts Foundation in New York and National Culture and Arts Foundation in Taiwan, and etc.
Back
返回頂端
關閉選單
Keywords: 文化部
fb youtube mail