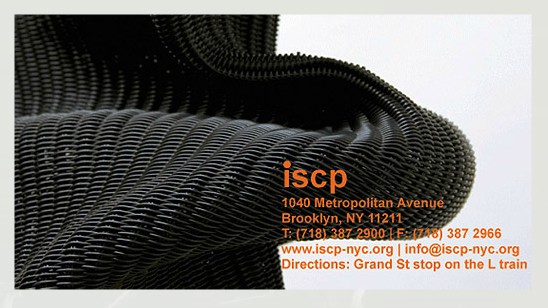 ISCP Open Studios presents works by the 25 artists and 3 curators in residence at ISCP. The current residents represent a wide range of conceptual interests and artistic choices, that take form through painting, sculpture, drawing, installation, video, sound art, artists' books, and any number of hybrid formats.

As a new feature inaugurated at this Open Studios, a program of live music, performances, artist talks and film screenings, organized by curators in residence and staff at ISCP, will accompany the exhibition (schedule to be announced soon).

ISCP hosts Open Studios twice a year to give the public, art professionals and art enthusiasts access to contemporary art practice from around the world. Free to the public, the Open Studios presents recent art and work in progress by the ISCP residents, providing an exclusive peek into the production, process, and personal archive of artists and curators.

Founded in 1994, ISCP has hosted more than 750 international artists and curators who have contributed New York's arts community while advancing their careers. ISCP's program is designed to connect residents to local institutions, key professionals and a broad range of international visitors. The interaction between artists, curators and critics creates opportunities supporting every stage of artistic development leading to intellectual exchange, critical feedback, participation in exhibitions, long-term collaborations and gallery representation.

SCP WOULD LIKE TO THANK THE FOLLOWING SPONSORS FOR THEIR GENEROUS SUPPORT: