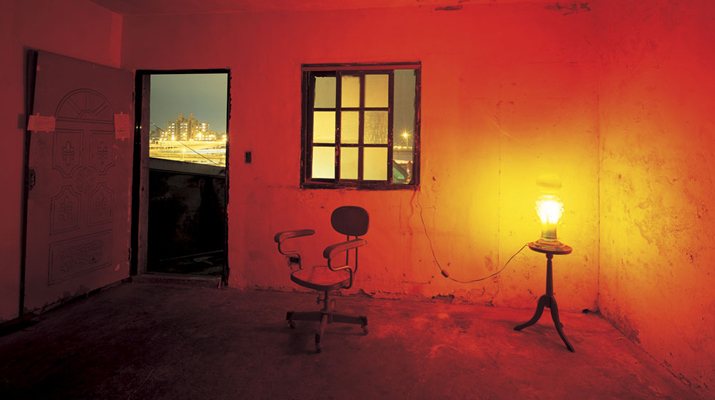 The Treasure Hill Tea + Photo Project / Phase Five / Oversight presents the individual and collective works of Taiwanese artists Wei-Li Yeh and Yu-Hsin Wu based on the community of Treasure Hill in Taipei, Taiwan. Spanning a period of over four years, this body of work integrates photography, text and video in a site-specific installation for the Centre A, Vancouver International Centre for Contemporary Asian Art, Canada.

Situated on the outskirts of Taipei on a hillside by Keelung River, the neglected Treasure Hill area has largely been forgotten by the majority of Taipei residents. Once a military post, the hillside was illegally occupied by soldiers and their families who had lived there during the 60's. These squatters built simple structures and houses, and were later joined by migrants from the countryside. During the 80s, as many as 200 households lived there. Due to the lack of planning, Treasure Hill was slum-like, crowded and disorderly. Several generations came and went, until merely a few dozen middle-lower class households remained and the neighborhood was slated for demolition. But through concerted campaigning and the efforts of cultural and social activists, experts and scholars dating back to the 1980s, the area was preserved.

In 2004, Wei-Li Yeh took up residence in Treasure Hill following a two months artist- in-residence program hosted by the Taipei Culture Bureau in the community. Yeh and his collaborators carried out four phases of the on-site Treasure Hill Tea + Photo(THTP) Project. During the next three years, Yeh primarily employed the medium of photography and text in his artistic practice while concurrently beginning the process of converting abandoned houses into a modest art center. Yu-Hsin Wu joined the project during Phase III, and together with Yeh continued to document the changes that took place in Treasure Hill through video and photography. By the end of 2006, this art center grew to include a teahouse, a museum which housed years of collected objects from the neighborhood, a darkroom and classroom, an exhibition space, a photo studio, as well as an outdoor garden and rooftop space for performance art - venues for public exhibition, cultural activities and long-term interactions with the community.

In Phase Five / Oversight, Yeh and Wu seek to reexamine their Treasure Hill experiences and processes, focusing primarily on the works made in Phase IV, while reflecting on the ramifications of their departure from the community. Their Treasure Hill residency included an active social practice and "spatial practice", whereby they ceased to be merely observers and documentarians, but also became an important part of the community and its rebuilding. By interacting with the community, and synthesizing the discarded objects found in the ruins, they gradually developed a new individual and collective way of identifying with a place.

Another trajectory for this curatorial project "Oversight" emphasizes the parallels between Treasure Hill and Vancouver Downtown East Side, where Centre A is situated, in the context of urban renewal plans. As old and poor urban districts, they are both inhabited by fringe and underprivileged sectors of society. Despite widely divergent cultural backgrounds and contexts, they are both sites and objects of compromise or sacrifice during the process of urban gentrification. Using the cultural and physical settings of Treasure Hill and Downtown East Side as a starting point for discussion, "Oversight" hopes to draw attention to the marginalization of social spaces within society. Based on the shared experiences of both places and through the dialogues created by the exhibition, we wish to explore how artistic practice and social activism can actively intervene in the face of complex cultural realities and provide compelling provocations and ideas on the preservation of local history and culture.

Wei-Li Yeh is a Taipei based photographer, educated in the US at Rhode Island School of Design and the University of Florida. Since early 90's he has exhibited internationally.

Yu-Hsin Wu is a multi-media artist based in Taipei, She works in collaboration with Wei-Li Yeh on the THTP project.

Amy Cheng is an independent curator based in Taiwan. She used to live in Vancouver and curated Invisible City at Centre A in 2003. She has curated numerous international exhibitions including Taipei Biennale (2004).

Centre A gratefully acknowledges the generous support of its patrons, sponsors, members, partners, private foundations, as well as government funding agencies, including the Canada Council for the Arts, the British Columbia Arts Council, and the City of Vancouver through the Office of Cultural Affairs.