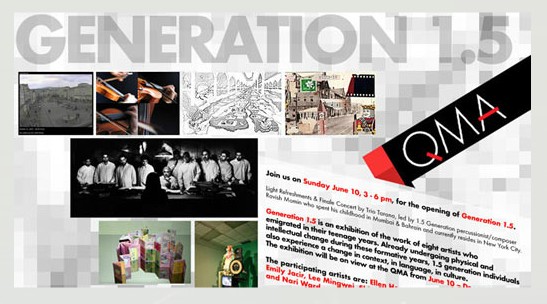 Generation 1.5 is an exhibition of the work of eight artists who emigrated in their teenage years. The term "generation 1.5" is used in some communities to describe those who are neither adult immigrants nor American born -- the in-between generation of people who moved from one country to another between the ages of 12 and 18. Already undergoing physical and intellectual change during these formative years, 1.5 generation individuals also experience a change in context, in language, in culture. The premise of the exhibition is that the relationship of a 1.5 artist to their adopted country is different than that of a person who immigrated when they were much younger or older. Generation 1.5 is curated by Executive Director of the Queens Museum of Art, Tom Finkelpearl and Chief Curator, Valerie Smith. The exhibition will be on view at the Queens Museum of Art from June 10, 2007-December 2, 2007. The participating artists are: Ellen Harvey, Pablo Helguera, Emily Jacir, Lee Mingwei, Shirin Neshat, Seher Shah, Rirkrit Tiravanija, and Nari Ward.

Some of the issues surrounding the 1.5 generation center on immigration, cultural dislocation and memory, hybridity, acceptance, exile and perhaps a certain type of transgression: critique of their native country or their adopted country, a freedom to be revolutionary or assimilated in both places. However, these issues are not explicitly addressed in all the works. In some cases, they are subtly implied. Generation 1.5 is a term that is contested and defined differently by sociologists, but the curators have taken the meaning that they first heard in Queens - those who came between the ages of 12 and 18. While many of the artists are classic "1.5ers" who came in their teen years, others traveled extensively throughout their lives. With the exception of Ellen Harvey's, A Whitney for the Whitney at Philip Morris/Altria or I Can Be An American Visionary Too! (2003) all the works are new, reworked or never-before-exhibited in New York.

In lieu of a traditional exhibition publication, the museum is building a website as the foundation for a post-exhibition catalogue. This site will run throughout the course of the exhibition; it is intended to generate thoughtful debate, from artists and non-artists alike, on the influence that being 1.5 may or may not have on artistic practice. Sociologists Patricia Fernandez-Kelly of Princeton University, Philip Kasinitz of Hunter College Graduate Center and Pyong Gap Min of Queens College and Graduate Center will contribute to discussions on the site. Conversations are planned between artist Shirin Neshat, filmmaker Shoja Ajari and Associate Director of the Kevorkian Center for Near Eastern Studies at NYU, Shiva Balaghi and also between Ellen Harvey and her sister, the poet Matthea Harvey. Essays about the artists will also be included: Olu Oguibe, Associate Professor of art and African American studies at the University of Connecticut, will be writing about Nari Ward and Hubertus Breuer, a German science journalist based in New York, will contribute a piece about Lee Mingwei.In addition, curators Valerie Smith and Tom Finkelpearl conducted an interview with artist Rirkrit Tiravanija and participated in a roundtable discussion with Shirin Neshat, Ellen Harvey, Lee Mingwei, Seher Shah, and Shazia Sikander. The website, http://queensmuseum.blogspot.com/, will be launched on June 10th and will also be accessible from the museum's website.

Ellen Harvey was born in the U.K. and moved to Milwaukee, Wisconsin as a teenager. A Whitney for the Whitney at Philip Morris/Altria or I Can Be An American Visionary Too! (2003) combines selected works from the Whitney Museum's contemporary collection with scaled replicas of the works from the 2001 collection catalog American Visionaries. The images in Harvey's artist-as-curator endeavor are hand-copied and rebuff traditional art historical practice (they are arranged alphabetically by artist).

Pablo Helguera was born in Mexico City and has lived in Chicago and Barcelona. His piece, Everything in Between (2007), is a newly-commissioned, multi-media installation that functions as an autobiographical novel. Based on a kunstlerroman-a novel in which the protagonist undergoes an artistic evolution-Helguera's installation depicts a 4-year transition (1988-1992) in 20 explanatory chapters and will soon be accompanied by the book The Boy Inside the Lettern.

Artist Emily Jacir was born in 1970, raised in Saudi Arabia and attended High School in Rome, Italy. In linz diary (2003), Jacir explores the complexities of surveillance by inserting herself into the frame of one of the Austrian city's multiple webcams. Thus, she asserts herself as a resident of both this space and the global network of images residing in unknown locations.

Lee Mingwei initially emigrated from Taiwan to the Dominican Republic, spent summers in a Chan monastery and attended High School in California. In his piece, Quartet Project (2005/2007), the visitor's movement dictates how much or how little of Antoine's Dvorak's American String Quartet in F, Op. 96 can be seen or heard as the gallery space transforms into an audio-visual mechanism of desire and frustration.

Shirin Neshat moved from Iran to the United States to attend high school. Her piece, The Last Word (2004), is a DVD projection depicting the interrogation/condemnation of an artist and her threat to the bureaucratic establishment. The Last Word (2004) relates to the Iranian intellectual's struggle for freedom of expression.

Pakistan-born artist Seher Shah moved to London and Brussels and attended High School in New York City. In Shah's The Jihad Pop Progression Series (2006/2007), layered motifs derived from architectural references and religious imagery interact within iconic Islamic spaces such as the interior courtyard. These energized realms are at once utopian and nostalgic.

Born in Argentina to a Thai family, Rirkrit Tiravanija moved to Thailand, Malaysia and Ethiopia before attending High School in Ottawa, Canada. His work speaks directly to these changing contexts and the mobility he has experienced since youth. The third in an edition of four, Untitled 2006, (passport 3) documents his extensive travels since the production of the prior passport. Each one of Tiravanija's hand-painted passports is meticulously composed and unique to a particular time and context of his life.

1.5 is made possible with funding generously provided by the National Endowment for the Arts, the Lily Auchincloss Foundation, Crystal Windows and Door Systems, Ltd., the Council for Cultural Affairs, Taiwan, R.O.C. in Collaboration with Taipei Cultural Center, TECO in New York, the New York State Council on the Arts, and the New York City Department of Cultural Affairs.