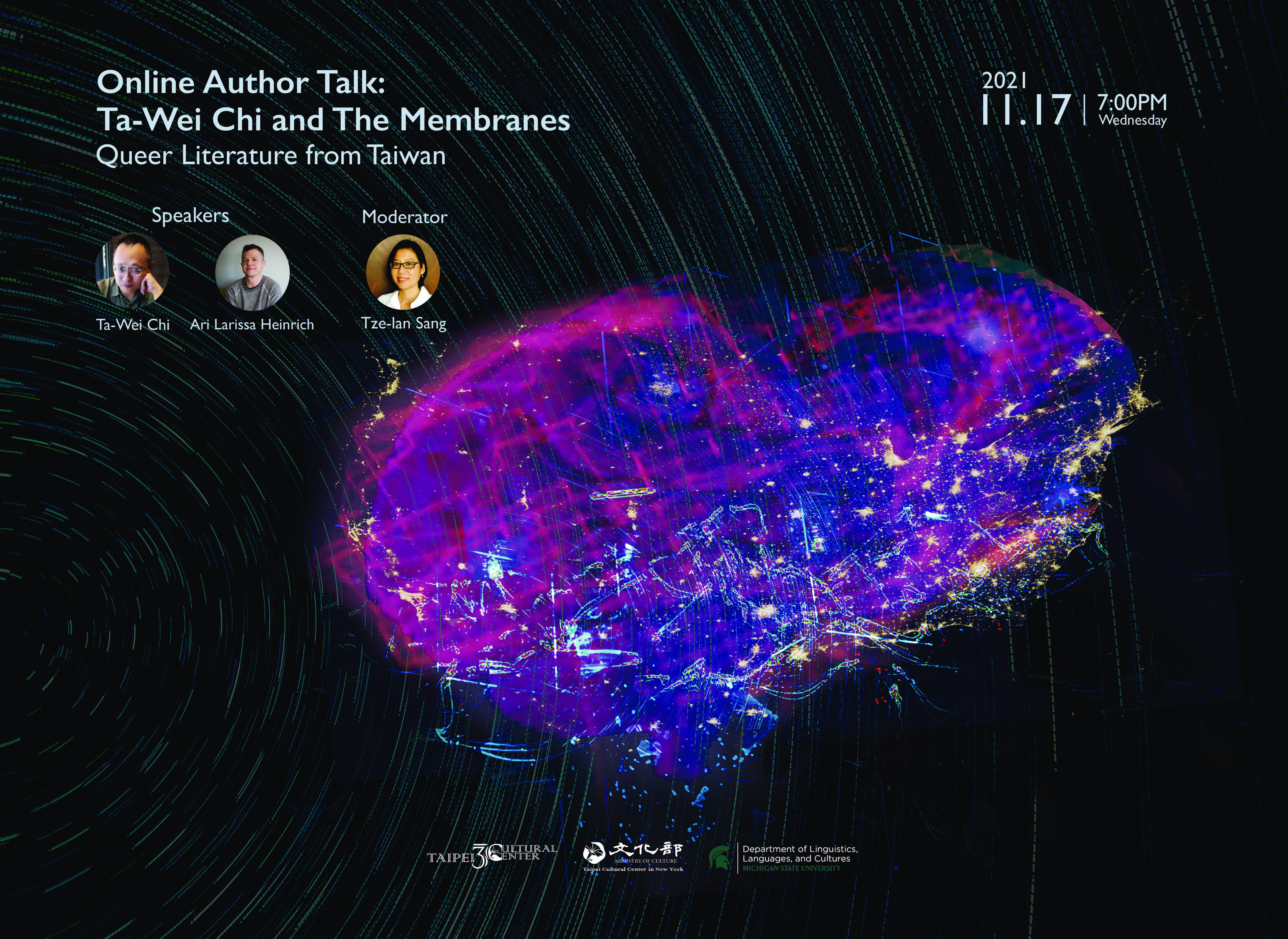 The Taipei Cultural Center and Michigan State University (Department of Linguistics, Languages and Cultures) are delighted to co-present an Online Author Talk: Chi Ta-Wei and THE MEMBRANES—Queer Literature from Taiwan.

♦Program
The program moderator, Tze-lan Sang, will interview Ta-Wei Chi, whose novel The Membranes was published in English in June, 2021 by Columbia University Press, and Ari Larissa Heinrich , who is the translator of the book.

♦About the Book
Books are all time-capsules, of course, but Chi’s novel offers an exquisite dual experience—because while The Membranes is a modern classic, it hasn’t lost an ounce of its provocative significance. As a gently incisive puzzle-box it works to pry at the readers’ own emotions about the nature of stories and how we’re made of them; as a novel of queer attachment, it explores how we attempt to connect to one another through endless membranes—and often fail to do so.~Tor.com

A mind-blowing book . . . I have NEVER read anything like it~Literary Infatuation

♦About the Author
Ta-Wei Chi is a queer science fiction writer in Taipei. His science fiction novel, The Membranes, originally published in Chinese, is available in Japanese, French and English. His science fiction story collection, The Pearls, is available in France. With a PhD in Comparative Literature at UCLA, he is associate professor of Taiwanese literature at National Chengchi University in Taipei, where he teaches LGBT studies and disability studies. His monograph in Chinese discusses LGBT and literature in Taiwanese history from the 1960s to the new millennium.

♦About the Translator
Ari Larissa Heinrich is a Professor of Chinese literature and media at the Australian National University. He is the author of Chinese Surplus: Biopolitical Aesthetics and the Medically Commodified Body (2018) and other books, and the translator of Qiu Miaojin’s novel Last Words from Montmartre (2014). He translated Ta-Wei Chi's novel The Membranes into English.

♦About the Moderator
Tze-lan Sang is Professor of Chinese Literature and Media at Michigan State University. Her main research interests are gender and sexuality studies, documentary film, and Taiwan studies. Among her major publications are The Emerging Lesbian: Female Same-Sex Desire in Modern China (Chicago, 2003) and Documenting Taiwan on Film: Issues and Methods in New Documentaries (Routledge, 2012). She is currently finishing a book titled Taiwan’s Women Documentary Filmmakers: Public Intellectuals and Innovative Artists. She is also a poet. Her poetry collection Time Capsules was published in Taipei in 2021 (Xiuwei).