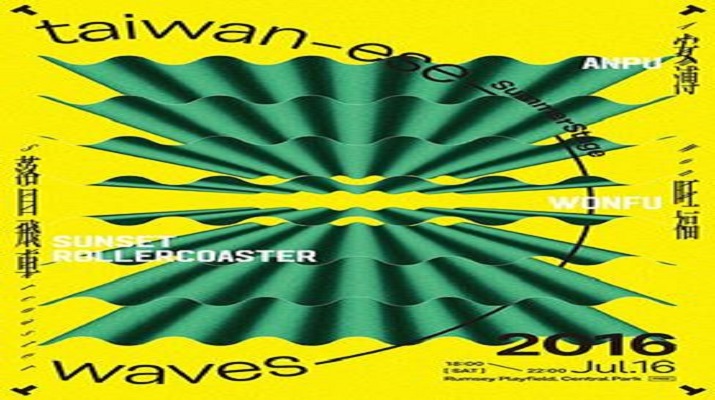 Sponsored by the Taiwan Ministry of Culture, Ministry of Foreign Affairs, Tourism Bureau and Taipei Cultural Center, organized by the curator Mia Min Yen, a performance, titled “Taiwanese Waves,” is slated to take place on Saturday, July 16th, in Central Park. Free and open to all ages, it will feature three diverse artists from Taiwan for four hours of music and festivities. It is the first time in the history of SummerStage, the iconic New York City music festival, playing host to artists from Asia.

SummerStage, a program of the CityParks Foundation, is known for presenting outstanding performances, free of charge in a world famous venue – Manhattan’s Central Park. The focus – music, diversity, community – is embodied in the talent of the festival’s performers.

Among the performers for Summer Stage’s “Taiwanese Waves” segment:

Anpu 安溥 (張懸, Deserts Chang, Zhang Xuan): A decorated singer, songwriter, producer, poet, and more, she’s known for her alternative sound that profoundly speaks to audiences. A hit at music festivals, she plays for sell-out crowds and is considered one of the most influential musical artists of this generation.
https://www.facebook.com/algae.deserts/?fref=ts
https://www.facebook.com/deserts.anpu/?fref=ts,

Sunset Rollercoaster 落日飛車: After being discovered and garnering critical acclaim for their self-released album “Bossa Nova,” Sunset Rollercoaster has brought their unique fantastical sound to festivals around the world. After releasing a new EP in early March, they’re ready to rock and roll.
https://www.facebook.com/sunsetrollercoaster/?fref=ts

Speaking about the unique facets and opportunities that “Taiwanese Waves” will provide, show curator Mia Min Yen said “This is a watershed moment for SummerStage, and I’m so excited to be bringing these accomplished and critically acclaimed artists from Taiwan for it. Taiwanese Waves is an intersection of diversity, culture, and music that I’m sure will inspire and be enjoyed by our audience.”