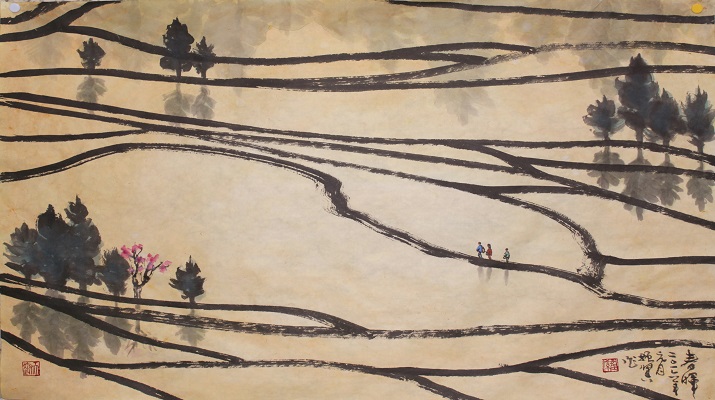 The exhibition “Ink Imagists: Modern Ink Paintings from Taiwan, Japan, and the U.S.,” set to open at Tenri Cultural Institute of New York on July 7, 2016 and run through the month, will offer a rare opportunity to view 30-plus paintings by some of the best ink artists from Taiwan and Japan.

Ink painting is regarded as an important art form in Asia. This year, with funding from the Ministry of Culture, the Taipei Cultural Center in New York has invited U.S.-based Taiwanese artist Charles Liu and Kazuko Takizawa from the Tenri Cultural Institute of New York to co-curate the “Ink Imagists” exhibition. Unlike previous collaborations that have been organized on a bilateral basis between Taiwan and the U.S. or Taiwan and Japan, this event marks the first time that the three countries are working together to co-present artwork by some of their best ink painting artists.

With a total of 8 artists participating in the event, the lineup from Taiwan represents the island’s ink painting history over the past half century. Apart from National Cultural Award winner Chiang Ming-Shyan and ink painting heavyweights Huang Kuang-Nan, Lo Cheng-Hsien, Charles Liu, and Lu Kun-He, artists such as Chang Fu-Chun, Yeung Chit and Huang Chien-Lun, who represent the younger generation of ink painters and the innovative and modern style of ink painting, will also have their works on display.

As for Japan, 13 paintings by four noted artists spanning three generations will be featured in this exhibition, including one of the most influential figures in modern Suibokuga Seiji Ishii (1922-1993), as well as Jiro Unno, Takumi Yoza, and Satoshi Nemoto.

Participating in this exhibition as a guest group, the Sumi-e Society of America (SSA) was founded by Japanese American artist Motoi Oi in New York in 1963, as he hoped to bring in a new artistic spirit to the American art world through the medium of ink. Five decades later, now the society has now become the largest ink painting group in the U.S.

As a side event of the exhibition, an ink painting demonstration, hosted by senior librarian Jessica Cline, will be held from 6:30-8:00pm, on Wednesday, July 6 at Mid-Manhattan Library, during which artists Yeung Chit from Taiwan and Jiro Unno from Japan will talk about their passion for the art form and have a live painting performance.