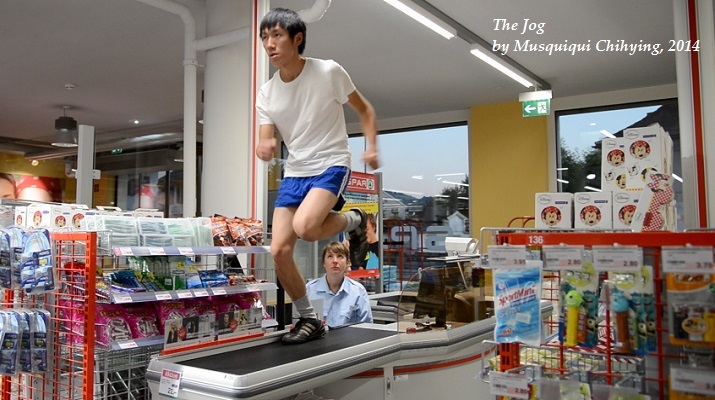 No Cause for Alarm, an exhibition that brings together the work of eleven artists from Taiwan, Hong Kong and China and includes artworks in the form of mixed-media installation, video and performance will run from September 15 to October 8, 2016 at La Mama Galleria in New York.

No matter where you live, people living in the city are facing various kinds of stresses and pressures. It could be coming from the society, system, work, family, or simply ones’ own expectations. No Cause for Alarm is an exhibition trying to investigate the nervousness in contemporary city life. The exhibition is focusing on the possibility but not the situation itself, because ‘situation’ is a state of flux that changes from time to time and varies from place to place. There is no point in discussing the situation without a thorough understanding of the causes and consequences. However, possibility implies potential and the unknown, which encourages imagination and creativity.

By understanding our own position in certain situations, we try to come up with suggestions and consolations to ease tensions. Artists taking part in this exhibition are invited to meditate on the current moment, unveil the overlooked in modern city life, and investigate the hidden conflicts in the vibrant metropolis. There is no pre-established perception or criticism, we are not pessimistic and have no intention to satirize or ridicule our society. We are trying to suggest an alternative way of being from a witty and humorous perspective.

We are living in a skewed social structure where various established meanings, and different forms of active or passive resistance are all put up in response to our sense of existence. Artists making improper expressions under inappropriate occasions always render distinct interpretations from their own perspective when they face any institution. These artists propose diverse analysis of the dramas, strangeness, nonsensical dialogs and narratives of daily life. They also question the evolving nature of the “ecology of the art world.” Their humorous approaches of dealing with reality imply a way of co-existence.

Artists in the exhibition investigate feasible ways of social intervention from various angles. They explore the boundary of urban environment and contemporary life, to disclose how habitual thinking in daily life influences the mode of thinking and behavior of the public. In TSUI Kuang-Yu’s video Rubbing the City: Beautiful Dirty Bubble, the artist created a bubble machine that runs on the exhaust of buses, transforming the imperfect, polluting vehicle emissions into dreamlike bubbles. The beautiful and transient reverie of the show examines the symbolic contrast of the sugar-coated rhetoric of our living system. What are the driving forces in life that could reach the reality as well as embrace the imaginary? How do we create a relationship between the current system of life and ourselves? Musquiqui Chihying’s two-channel video The Jog proposes a counterbalance to the daily routine and social norms. Both ‘Jogging’ in gyms, and ‘shopping’ in supermarkets, have become usual activities in city life. In modernized supermarkets, the rolling direction of the conveyor belt implies the objective of consumption behavior and the end of movement. The activity of jogging on the conveyor belt in the opposite direction acts as a counterbalance to capital operation. Most of SONG Ta’s work is rooted in the artist’s observations and inspection of reality. His work adopts a relaxed, comical attitude, which always takes us by surprise. The video installation piece Who Is the Loveliest Guy? is inspired by Wei Wei’s 1951 article Who Are the Most Beloved People?, a gracious depiction of the People’s Volunteer Army during the Korean War. In Song’s video, a group of heroic military officers are challenged to ride a roller coaster. Will they stay brave and composed in their face during this high-speed exciting journey?

SU Yu-Hsien’s installation and video work Hong-zhu is commissioned by Beautiful New Horizon Tainan Canal Festival. The artist and Miss Dan Hong Zhu work together to load a trolley with recycled waste to the maximum. In the end, they throw the assemblage into the canal. The small island of recycled materials floating on the river contrasts with the idealized vision of the host, who aspired to promote urban culture, and expected people to visualize the bright future of the canal. The value of things shifts from time to time between different people and contexts. They might turn up in recycling plants, or appear in museums. Luke CHING Chin Wai constantly probes the issues of contemporary life through his bantering and absurd performances. His identity shifts between an artist and an urban observer, and he responds to and questions the political and cultural clashes with his characteristic method of discussion and his individualized humorous manner. The artist obtained a security guard license in 2013. He works as a guard in various institutions which is a part-time job and an on-going project for him. It is a practice coming out from his spontaneous observation of the city. He is trying to rebuild a city which is in-between the real life city and a conceptual city, through his works of art.

Artists are also known for their practice of collage through various means. They piece together different social structures and perspectives; and patch up a reality, a conspiracy, a farce, or an imaginary future. In CHOU Yu-Cheng’s artwork, his investigation of modernity operates through issues of mechanism, art history, and autobiography. The selected piece Chemical Gilding, keep calm, galvanise, pray, gradient, ashes, manifestation, unequal, dissatisfaction, capitalize, incense burner, survival, agitation, hit, day light. II illustrates the perpetual circulation of psychological states of an individual in a social environment. The artwork’s lengthy title requires us to reflect upon the relationship between emotion, objects, and the public sphere. It exposes the current economic and social state under capitalism as chaos in control, a manipulated scheme. Ocean LEUNG’s works are based on the paradoxical relationships between art and the manipulation of society. All his art materials, printed vinyl banners of various kind of government promotion campaigns are ‘taken’ from the street, which are rearranged in a casual manner in reference to a range of commodities. It is the artist’s desire to challenge authority while at the same time the new artistic outlook relieves the seriousness from the authority. Speech from Qiao Xiao Yang, 24 March 2013 comprises 250 small newspaper clippings. Each held in a small plastic zipper bag is YIP Kin Bon’s interpretation of Qiao’s infamous speech. By isolating the Cantonese characters from headlines and images, Yip created a new narrative which not only draws our attention into the details of the cut-out, but more importantly, the missing content.

WANG Ding-Yeh’s Portrait under Electric Shock and Madness Electric Shock- Flag Song evokes the numbness of social life. Singing flag song under national regulation resembles an act of collective anesthesia—a slow and unconscious behavior, advancing unnaturally and unwarily. This piece tries to investigate the unconscious behaviors in society, on view in a state of spasm and convulsion for a long time. The two pieces of three-dimensional work by HUANG Yen Ying appear as familiar objects in Asian culture, displayed in a conventional way. Your 20th Century Tree resembles bonsai on a table commonly seen in Asia, but it actually represents a mushroom cloud—a satire that war is in fact a decoration for men in power. His other work Island is a horizontal plaque, which subverts its traditional writing form. When the character of ‘nation’ is lying down, a nation is no longer a nation, but resembles an island or an imaginary map of a utopia. When meaning and form change, symbols alter and identity shifts. This constant twisting produces possibilities of multiple layers of intellectual movements. Again toying with the familiar daily object, TANG Kwok Hin’s beautifully crafted suitcases bring our awareness to commercialism and urban life. The transparent suitcases are filled with recognizable objects that travel with the artist from Hong Kong, through customs to New York City, and interact with people along the way. The artist is not trying to integrate art into daily life but trying to examine the distance between art and life, which has always been an aspiration to his practice.