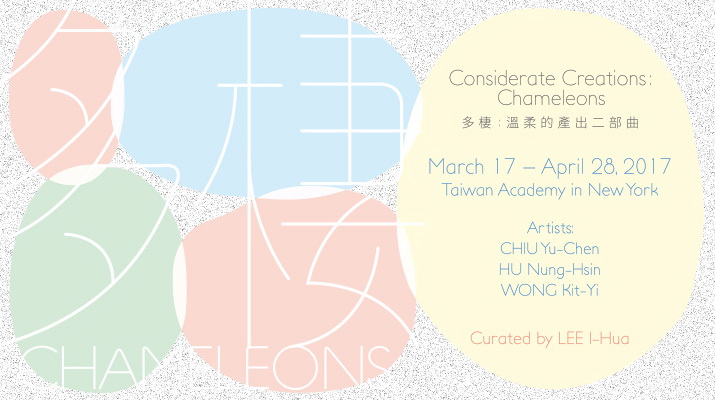 On view from March 17th to April 28th, 2017, the Taipei Cultural Center at TECO-NY is delighted to present a female group show, titled Considerate Creations: Chameleons. Curated by art manager I-Hua Lee of Taipei Artist Village, the exhibition implies that the hard work done behind the scenes allows art projects to successfully come to fruition. Videos, photographs and installations, all of which focus on the different roles of an artist's life, are part of the exhibition. Besides discussing their many roles, the exhibition also addresses family issues such as marital and parental relations.

Considerate Creations: Chameleons is a sequel of Considerate Creations, which was presented in Taipei Artist Village in 2015. To expand the dialogue from Taiwan to New York, the new exhibition consists of two parts. The first part of Chameleons is taking place at the Taiwan Academy in New York featuring three New York-based female artists, including HU Nung-Hsin, CHIU Yu-Chen and WONG Kit-Yi. In June, the second half will consist of another three female Taiwanese artists and will be held at Gallery 456, New York.

Chameleon artists is a global phenomenon in the art world, and it speaks to a certain quality of this business. When administrators or other art professionals work as artists, everything involved in their job becomes as equally fascinating as their art. They provide a novel viewpoint on various issues, and the outcome is fluid and influential.

These “Chameleon artists” take on multiple roles to make sure that they can secure the pursuit of their dreams. It’s a statement of dedication to art, and an expectation of considerate creations. We look forward to seeing this movement, and this group of artists bringing more insights and positive value into the art world and beyond. -Curator LEE I-Hua

CHIU Yu-Chen
Originally from Taipei, Taiwan, Chiu Yu-Chen is a photographer and new media artist currently residing in New York City. Her background includes a B.A. in English Literature from Chinese Culture University and an M.P.S. degree from the Interactive Telecommunications Program (ITP) at New York University. She has also pursued a Masters in Communication Studies and Film Productions at NYU and has studied photography at the Cooper Union and International Center of Photography (ICP).

Primarily, Yu-Chen’s work looks at themes of displacement and longing so often associated with the culturally unfamiliar, through the context of a trans-cultural environment. As viewing through an outsider's prospective, Yu-Chen uses landscapes and cityscapes as her subjects to investigate the subject matter.

Yu-Chen’s artwork has been exhibited and screened worldwide, such as at the Chelsea Art Museum, the South Street Seaport Museum, and the Sony Wonder Lab Museum in New York City, USA; Musee du Louvre Paris, France; VIDEOFORMES in Clermont-Ferrand, and Reportage Photo Festival in East Sydney, Australia. She was the recipient of the New Creation Jury Award of VIDEOFORMES in France, the winner of the 2015 EYEEM Photo Awards (The Traveller Category), 2013 B+W Magazine Single Image Winner, two silvers for Paris PX3, the finalist of Reportage Photo Festival in East Australia, and the honorable mention for IPA (International Photography Awards), Julia Margaret Cameron Award.

HU Nung-Hsin
Hu Nung-Hsin is a Taiwanese born visual artist and art administrator currently based in New York City. After receiving her MFA in Fine Arts from Long Island University in 2009, Hu has devoted herself to being a practicing artist as well as working with art communities. Hu primarily works in the Artist Studio Residency Program and New New Yorkers Program at the Queens Museum. As a multidisciplinary artist Hu works in sculpture, installation, video, and performance art and has exhibited and screened both in the U.S. and abroad including SCOPE New York, D.U.M.B.O. Arts Festival, Water Tower Art Fest, Sophia, Museum of Modern Art, Buenos Aires, and Videoformes Festival, France. Hu has also received various honors and residency programs including the Jamaica Center for Arts and Learning – Van Lier Fellowship, Mentor of NYFA’s Mentoring Program for Immigrant Artists, Taipei Artist Village – Boundary-Break-Through Project Grant, Taiwan Ministry of Culture, the International Residency and Cultural Exchange Grant, the Casa das Caldeiras residency in São Paulo, Brazil, the Chashama Studio Program in Brooklyn Army Terminal, as well as the Lichtenberg Studios in Berlin. Hu will also participate in the Arctic Circle Residency in 2017.

WONG Kit-Yi
Wong Kit-Yi is a Hong Kong-born artist who lives in New York. She received her MFA from Yale University in 2012. She previously received the Susan H. Whedon Award (2012) from Yale University and Cheung’s Creative Award (2006) from the Chinese University of Hong Kong, and was a Sovereign Asian Art Prize finalist (2005). Wong's work has been reviewed in the New York Times, Art in America, e-flux conversations, Asian Art News, The Art Newspaper, China Daily and Modern Painters.

Her recent projects have appeared in the solo shows Sandwich Theory: convertible painting series (2016), a.m. space, Hong Kong and North Pole Futures (2015), K. gallery, New York, as well as in the group exhibitions regarding lightness: On Life’s Way (2015), Oil Street, Hong Kong; Bringing the World into the World (2014), Queens Museum, New York; The Ceiling Should Be Green (2013), P! gallery, New York; and EXCHANGE (2013), School 33 Art Center, Baltimore. She was invited to have a conversation with American Conceptual Art pioneer Mel Bochner at Asia Art Archive in America (2013) and to give a lecture at the San Francisco Art Institute (2014). In 2015, Wong participated in an Arctic Circle expeditionary residency (2015) with partial support from the Jerome Foundation.

This exhibition is sponsored by the Ministry of Culture, R.O.C. (Taiwan)
For more Information or register for the opening reception, please contact tpecc at oliviasu@moc.gov.tw
Facebook/tpecc.org