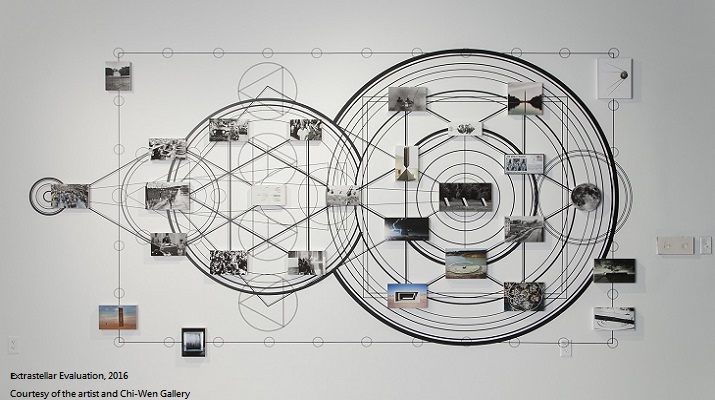 For its third consecutive appearance at Frieze New York and first time in the art fair's Main Section, Chi-Wen Gallery will present Chien-Chi Chang’s The War That Never Was (2017) and Yin-Ju Chen’s Extrastellar Evaluations (2016).
In the video The War That Never Was, Chang interviews his mother, who was born in 1938 in a poor region of Taiwan. His questions are about her life as a wife, a mother and a laborer. With her life dedicated to survival, global affairs have little meaning to her and she never heard of the Cold War.
The questions juxtapose important family moments with historical events during the Cold War, presented as archival photographs, film and sketches.
The presentation is complemented with a sound installation “You and the Atomic Bomb by George Orwell 1945,” in which Stephen Barnes reads the famous George Orwell essay “You and the Atomic Bomb” that coined the term “Cold War.”
Chen explores the function of power in human society, collective thinking and collective unconsciousness, and most recently the relationship between human behavior and the cosmos. Extrastellar Evaluations continues her research into dystopia, conspiracy and art history.
Referencing a theory within biogeography that posited the existence of a “lost land” called Lemuria, the work envisions a version of history in which Lemurians lived among humans in mid-20th-century America, under the guise of renowned artists. The 1960s are presented as a key era that saw significant events, including the Cold War, the Vietnam War, the Cultural Revolution and the civil rights movement.
Chen’s work highlights the destructiveness of human activities and the need to step back and reassess.