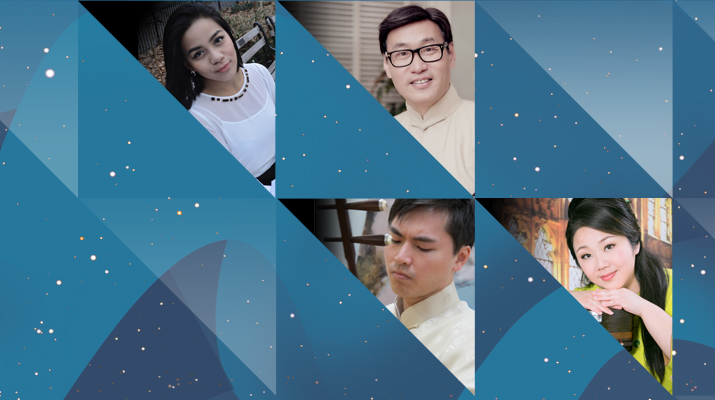 Taipei Cultural Center will present Taiwan Traditional Music Concert on April 16th at Taiwan Academy. Once again we sincerely invite you to attend our concert.

Wei-yang (Andy) Lin
Wei-Yang Andy Lin, born in Taiwan, holds his Bachelor and Master’s Degrees from The Juilliard School. He has won Top Prize in the Juilliard Viola Concerto Competition and subsequently made his Avery Fisher Hall solo debut. Mr. Lin is currently the artistic director of the New Asia Chamber Music Society and the New York Formosa Choir. He has performed the erhu solo part at the U.S. Premiere of Sir Peter Maxwell Davie’s “Kommilitonen!” with the Juilliard Opera Production, as well as the world premiere of Jeeyoung Kim’s “Engraft” for solo erhu and string orchestra with Solisti Ensemble at Carnegie Hall’s Zankel Hall. He was recently invited by the Milwaukee Symphony Orchestra to play the solo erhu part in “Iris dévoilée” by Chen Qi-Gang in Milwaukee and in Carnegie Hall’s Stern Auditorium. He also serves as a faculty member at the Chinese Cultural Arts Institute of Harrisburg.

Yimin Miao
Yimin Miao is an internationally renowned Chinese woodwind virtuoso. He is the founder of the Ba Ban Chinese Music Society of New York. When Miao was nine years old, he started studying dizi privately with Mr. YU Xunfa, the most celebrated musician in China. Miao is a former flutist with the internationally acclaimed Shanghai Traditional Orchestra. Miao immigrated to the United States in 1996 and has performed at Lincoln Center, Carnegie Hall and the Metropolitan Museum of Art. He has lectured and conducted workshops at Yale University, Cornell University and New York University. Miao is not only a specialist on the dizi and xiao, but he is also a virtuoso performer and instructor on other Chinese wind instruments as well. As a seasonal artist of the Santa Fe Opera in 2014, Miao played various bamboo flutes in the premiere production "Dr. Sun Yat-sen".

Shih-hua Judy Yeh
Shih-Hua (Judy) Yeh, acclaimed Guqin and Guzheng Master, is both Founder and Director of the Taiwanese Music Ensemble of New York. She is also Founder of the New York Guqin School. Shih-Hua has specialized in playing professional concert performances on many varied Chinese musical instruments. She is a highly respected music educator and was named an official judge of music examinations by the China Conservatory of Music and Chinese Music Organization in 2011. She has also been a lecturer of the Jinwen University of Science and Technology in Taipei.
Ms. Yeh graduated from the Taipei National University of the Art (TNUA) with a Guqin Major and earned her Master’s degree in Ethnomusicology from Sheffield University in the UK. She is a member of Water Stage Ensemble based at TNUA and has performed both nationally and internationally. She has won numerous awards in distinguished Chinese music events. She has been invited to perform at such highly honored and respected professional venues as Lincoln Center, Merkin Hall and Weill Recital Hall, Carnegie Hall.

Joy Chi Wang
Indigenous Taiwanese pianist Joy Chi Wang, expecting herself as a versatile artist, has presented abundant music related performances in various forms as a soloist, chamber musician and singer.
During college years, Ms. Wang has own first prizes in two competitions in Taipei, Taiwan with exceptional scores. In the year 2009, she has been granted second prize in Taiwan area of Japan Classic Music International Competition. After finishing her bachelor degree, Ms. Wang received admissions for master degree from Manhattan School of Music, Mannes School, New York University and Carnegie Mellon University with scholarship. Under the studio of well-known music educationist Nina Svetlanova in Manhattan School of Music, Ms. Wang has been highly commented by Ms. Svetlanova as being “A very talented, artistic, characteristic, mature pianist with great musicality and a certain presence of stage.”
Ms. Wang is now piano faculty in Brooklyn Musical Arts, staff accompanist in Manhattan School of Music and member of Julep Piano Trio.