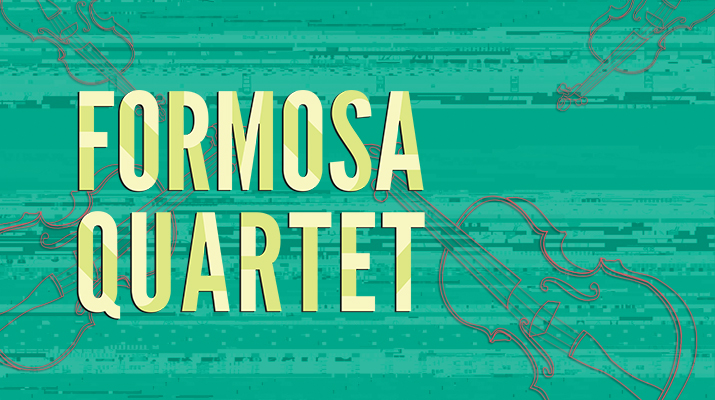 *commissioned by the Formosa Quartet


Formosa Quartet:
Winners of the First Prize and the Amadeus Prize at the London International String Quartet Competition in 2006, the Formosa Quartet is “one of the very best quartets of their generation” (David Soyer, cellist of the Guarneri Quartet). Its debut recording on the EMI label was hailed as “spellbinding” (Strad Magazine) and “remarkably fine” (Gramophone), and the quartet has given critically acclaimed performances at the Ravinia Festival, the Caramoor Festival, the Library of Congress, the Da Camera Society of Los Angeles, the Chicago Cultural Center, the Walter Reade Theater at Lincoln Center, Rice University, San Francisco State University, and Wigmore Hall in London. Formed in 2002 when the four founding members came together for a concert tour of Taiwan, the Formosa Quartet is deeply committed to championing Taiwanese music and promoting the arts in the land of its heritage and the world beyond.

In its relatively brief existence, the Formosa Quartet’s active commissioning has contributed significantly to the 21st century’s string quartet literature. They premiered Taiwanese-American composer Shih-Hui Chen’s Returning Souls: Four Pieces on Three Formosan Amis Legends in 2014, and the Quartet’s recording of its first commission from Ms. Chen, Fantasia on the Theme of Plum Blossom, was released on the New World Records label in 2013. Other pieces recently written for the Quartet include three pieces by Dana Wilson — Hungarian Folk Songs, The night of h’s, and Apart — Wei-Chieh Lin’s Pasibutbut, and Thomas Oboe Lee’sPiano Quintet and Jasmine Variations.

The Formosa Quartet members are also the founders and faculty of the annual Formosa Chamber Music Festival (FCMF) in Hualien, Taiwan. Inaugurated in 2013 and modeled after American summer festivals such as Marlboro, Ravinia, the Taos School of Music, and Kneisel Hall, FCMF is the product of long-held aspirations and years of planning, and represents one of the quartet’s more important missions: to bring high-level chamber music training to talented young musicians in Taiwan and first-rate music to Taiwanese audiences.
http://formosaquartet.com/