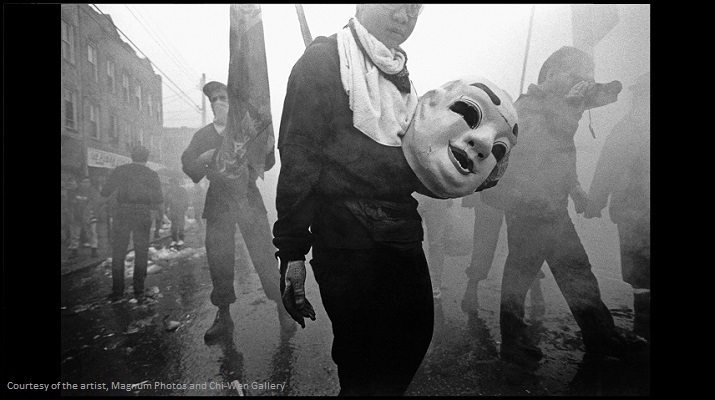 For his ongoing project China Town (1992-2011), Chien-Chi Chang first became interested in themes related to the dispersion of Chinese individuals and families from their homeland in 1992. In the years since he has closely followed and documented the lives of illegal immigrants in New York City's Chinatown, who left China as a matter of survival. As an artist Chien-Chi Chang explores alienation and connection between people in contemporary society by developing long-term, interactive relationships with his subjects. China Town consists of 18 families portrayed in sets of either 2 or 3 black/white and color photographs (total 38 pieces), together with one single channel video.

Again using the medium of photography and video as his artistic medium, Escape from North Korea (2007-2011) records the dangerous journey by North Korean defectors, traveling over 5000 miles and crossing China and Laos, into Thailand. This contemporary narrative of historical significance continues with the defectors facing the new challenge of starting a new life in South Korea. Escape from North Korea consists of a single–channel video installation and seven B/W and color photographs.

The exodus of North Korean defectors into China began in late 1990s after a severe famine that destroyed at least one million of its 23 million people. Once they cross the border to China, they’ll be in hiding and waiting to embark on an extremely secretive, dangerous escape route, known as Asia’s Underground Railroad from northern China all the way to Laos, crossing Mekong River, to Thailand and finally to South Korea.

The unpredictable journey can take weeks, months or even years. Chinese police routinely hunt for North Koreans attempting to escape cross-country. Police crackdowns can net hundreds of victims. If they are caught while escaping in China and Laos, they will be repatriated to North Korea, facing severe labor camps or capital punishment. Magnum photographer Chien-Chi Chang traveled with the defectors to document the darkest journey in 2007 and 2008. To date, He has continued to document the plight of North Korean defectors.

Immigration is propelled by suffering. To witness the shifting patterns of populations is to see the world in all its exigencies—war, natural disasters, repression, famine, poverty and persecution. But there is a rainbow at the bottom of that Pandora’s box of troubles; hope, too, propels immigrants to settle in strange lands.

Perhaps the most aspirational of the world’s people are the Chinese. For them, New York’s Chinatown is the capital city of promise, the place you go to make a new life for your family, a fortune. It is no coincidence that the boatload of illegal immigrants who grounded on a New York City beach in 1993 sailed on a ship called the Golden Venture. And this movement of people is an increasingly critical social issue. As the relationship between the U.S. and China grows ever more complex on an economic level, these individual stories, too, are weaving together the future of two nations.

To contrast the bleak, black-and-white lives of the men in the U.S. Chien-Chi Chang chose to photograph the families in China in color. Like the families who have granted access to him, the project has also grown and changed over the years. In 2005 he began using audio recordings and, in 2007, video recordings to continue to document the divided families. Now he is ready to move the project to a higher dimension through the combination of still images and moving images within soundscape. And, ultimately, to do what has never been done before—to make these invisible families, with their sufferings and triumphs, at last visible.

The past 20 years of developing these relationships are now culminating in a tri-generational drama. Some of the first waves of illegal immigrants are choosing to return to China to enjoy the prosperity they have created there and spend the rest of their lives with family members they have not seen for nearly two decades. Yet their sons still choose to be smuggled to New York, leaving their own families behind. Divided families remain divided.

The compelling quality of this project is its universality. It is about the essential human need to hold hope in your hands and about having the willingness to sacrifice one’s own immediate happiness to realize the dream of giving children a "better" life. But is economic prosperity worth the social cost? Perhaps the answers to such questions we all ponder can be found in the lives of the people left behind in China and in those of the second and third generation immigrants growing up in the United States. Look at them, and listen to their voices. You may not understand their language, but you can feel their longing.

About Chien-Chi Chang
Primarily using photography as his artistic medium, Chien-Chi Chang (b.1961) explores alienation and connection between people in contemporary society by developing long-term, interactive relationships with the subjects. In his earlier, well-known series The Chain (1993-1999) which was exhibited at the Taiwan Pavilion of the Venice Biennale in 2001 and the Bienal de São Paulo in 2002, Chang creates life-sized portraits of patients at Taiwan's Long Fa Temple psychiatric hospital. His 2002 series I do I do I do exposes subtle societal factors that underpin marriage using a photo album format. In his 2005 series Double Happiness, Chang uses a straight-forward format to document the marriage brokerage process used by Vietnamese brides and Taiwanese grooms.

Starting in 1992, Chang became interested in themes related to the dispersion of individuals or families from their homeland, and in the 20 years hence, followed the lives of illegal immigrants in New York City's Chinatown who left China as a matter of survival. Entitled China Town and still in progress, the series was exhibited in the artist's mid-career survey Doubleness at the National Museum of Singapore in 2008, and at the Taiwan Pavilion of the Venice Biennale in 2009. In 2007, Chang travelled with North Korean defectors from Northeast China to Thailand, documenting their lives for his work Escape from North Korea, which won the Canadian Anthropographia Award for Human Rights in 2011. In recent years Chang has expanded his medium to include sound and the moving images, which has enriched his photography-based narratives with additional, multiple elements.

Chang received his bachelor's degree from Soochow University in 1984, and his master's from Indiana University in 1990. He began a professional career as a photojournalist in 1991, and has worked for both the Seattle Times and the Baltimore Sun. He joined the world famous photographic cooperative Magnum Photos in 1995 and became a full member in 2001.

About Chi-Wen Gallery
Founded in 2004 by Chi-Wen Huang, Chi-Wen Gallery is one of Taiwan's leading galleries, showing the best of contemporary Taiwanese art with a focus on video and photography. The gallery is dedicated to supporting emerging artists with curatorial projects that explore the most cutting-edge subjects and has been actively participating in local and international art fairs. As such Chi- Wen Gallery is very much connected with today's art and represents artists whose work continues to grow in historical importance. Over the last decade Chi-Wen Gallery has fostered the careers of a diverse group of internationally renowned artists, both emerging and established, whose practices transformed the way art is made and presented in Taiwan today. These artists include Chen Chieh-Jen, Chien-Chi Chang, Peng Hung-Chih, Yao Jui-Chung, Hung Tung-Lu, Yuan Goang-Ming, Chen Shun-Chu, Wu Tien-Chang, Tusi Kuang-Yu, Jawshing Arthur Liou, Yu Cheng-Ta, Chen Yin-Ju, James T. Hung and among others.