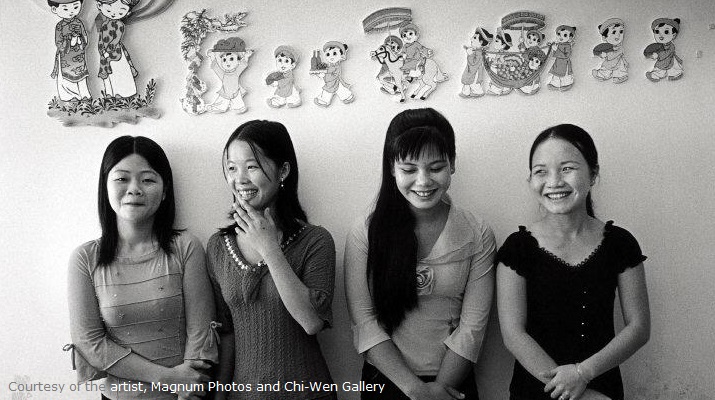 Marriage brokers recruit young Vietnamese women to come to Ho Chi Minh City where they are viewed by groups of Taiwanese men. Each of them pays a fee to pick a suitable bride from the lineup. Within days of meeting, the couples will be married. By using the medium of photography and video as his artistic medium, in Double Happiness, Chien-Chi Chang offers a series of scenarios following the process of arranged marriage in south-east Asia: from selection and application to all the paperwork and the final ceremony. The images are accompanied by interviews with the brokers, the men and women that take place between the potential bride and grooms as they determine the suitability of their partners.

About Chien-Chi CHANG
Primarily using photography as his artistic medium, Chien-Chi Chang (b.1961) explores alienation and connection between people in contemporary society by developing long-term, interactive relationships with the subjects. In his earlier, well-known series The Chain(1993-1999) which was exhibited at the Taiwan Pavilion of the Venice Biennale in 2001 and the Bienal de SãoPaulo in 2002, Chang creates life-sized portraits of patients at Taiwan's Long Fa Temple psychiatric hospital. His 2002 series I do I do I do exposes subtle societal factors that underpin marriage using a photo album format. In his 2005 series Double Happiness, Chang uses a straight-forward format to document the marriage brokerage process used by Vietnamese brides and Taiwanese grooms.
Starting in 1992, Chang became interested in themes related to the dispersion of individuals or families from their homeland, and in the 20 years hence, followed the lives of illegal immigrants in New York City's Chinatown who left China as a matter of survival. Entitled China Town and still in progress, the series was exhibited in the artist's mid-career survey Doubleness at the National Museum of Singapore in 2008, and at the Taiwan Pavilion of the Venice Biennale in 2009. In 2007, Chang travelled with North Korean defectors from Northeast China to Thailand, documenting their lives for his work Escape from North Korea, which won the Canadian AnthropoGraphia Award for Human Rights in 2011. In recent years Chang has expanded his medium to include sound and the photogarphy-based images, which has enriched his image based narratives with additional, multiple elements.
Chang received his bachelor's degree from Soochow University in 1984, and his master's from Indiana University in 1990. He began a professional career as a photojournalist in 1991, and has worked for both the Seattle Times and the Baltimore Sun. He joined the world famous photographic cooperative Magnum Photos in 1995 and became a full member in 2001.

About Chi-Wen Gallery
Founded in 2004 by Chi-Wen Huang, Chi-Wen Gallery is one of Taiwan’s leading galleries, showing the best of contemporary Taiwanese art with a focus on video and photography. The gallery is dedicated to supporting emerging artists with curatorial projects that explore the most cutting-edge subjects and has been actively participating in local and international art fairs. As such Chi-Wen Gallery is very much connected with today’s art and represents artists whose work continues to grow in historical importance. Over the last decade Chi-Wen Gallery has fostered the careers of a diverse group of internationally renowned artists, both emerging and established, whose practices transformed the way art is made and presented in Taiwan today. These artists include Chen Chieh-Jen, Chien-Chi Chang, Peng Hung-Chih, Yao Jui-Chung, Hung Tung-Lu, Yuan Goang-Ming, Chen Shun-Chu, Wu Tien-Chang, Tusi Kuang-Yu, Jawshing Arthur Liou, Yu Cheng-Ta Chen Yin-Ju, James T. Hung and among others.

ABOUT inCube Arts
Based in New York City, inCube Arts is an independent 501(c)(3) nonprofit tax-exempt organization dedicated to fostering new forms of cultural exchange and creative expression through exhibitions, art festival, workshops and public lectures and year-round public programs. In the missions of “Nurturing international artists, empowering international curators and creating a platform for art resources”, inCube Arts committed to supporting independent curators and emerging and established contemporary artists, we realize this mission through our multi-functional programs such as the “inToAsia: Time-based Art Festival”, “Emerging Curators Program”, “inDialog forum” and “Screening Program”. inCube Arts aims to create a beyond-institution, trans-disciplinary and cross-continent stage for the professionals to brainstorm their avant-garde, experimental and brilliant ideas.
In addition, inCube Arts SPACE coordinates and produces exhibitions, located on the Midtown West Side of New York City, the SPACE is a lab and forum for experimentation and critical discussion. “inCube Arts SPACE” programme is made possible with the generous support by Mr. Jeremy HU. Special thanks go to our wonderful volunteers, without whom this program would not be possible.