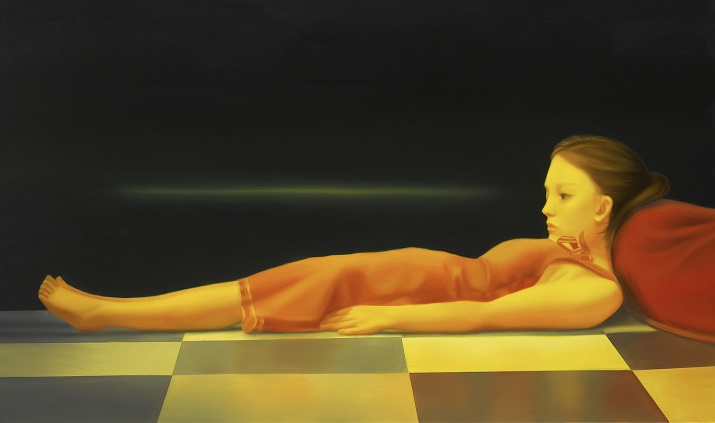 The renowned 20th century British feminist writer Virginia Woolf (1882-1941) wrote in the collection of essays, A Room of One's Own (1929), that "a woman must have money and a room of her own if she is to write fiction.” She plainly pointed out that as long as a woman can maintain her independence, she can fulfill her creative desires. The female artists in this exhibition were all born between 1980-1989, more than 100 years after Woolf. They are not burdened with much baggage from the past. Growing up in the age of greater gender equality, the female artists of this generation do not deliberately discourse on feminist issues. Rather, they are more concerned about the society, the environment and their own life experiences. Their style and choice of medium are also more diverse and unconventional.

There is a thematic thread in CHANG Chia-Yiang and CHANG En-Tzu's paintings that suggests something like a fairy tale. The former juxtaposes Eastern and Western fairy tale characters such as in “The Wolf and A Fairy Fox At the Magical Theatre.” The central character has a pair of big dark eyes devoid of facial expression that sets it apart from the usual outpouring of emotions in fairy tales. CHANG Chia-Yiang creates a seemingly peaceful yet strange and eerie world.

CHANG En-Tzu's Perfect Imperfection offers an alternative interpretation of the familiar Snow White in a mixed media of paint and embroidery. It bespeaks the distance between reality and the imagined while simultaneously, attempts to bridge and close the gap between the two worlds. The eerie color and material residue suggest a realistic and anxious atmosphere.

Fairytale elements also appear in the work of Joyce HO. Her sculpture Daydream features a yellow bird with a disproportionately small body and disguise. But her paintings often feature female protagonists with intensely awkward bodily angles and repressed postures. The use of highly saturated colors accentuates a tense state of mind.

HO Szu-Wei and Hsieh Yi-Ju’s paintings are full of childlike imagination based on nature, life memories and experiences. From the intertwining of animals, plants, people and objects in HO's watercolor Blue Egg I, and print The Child with Rabbit Ears, emerges a strange and delicate fantasy world. With fairytale-like dolls and animal puppets in brilliant colors, Hsieh Yi-Ju’s Be Brave successfully projects a beautiful world. The graffiti element in HSIAO Chu-Fang's Smoking Head expresses a feeling of helplessness with blunt humor.

YEN Yi-Ting and Huang Hai-Hsin’s creative ideas stem from societal issues and news headlines, with a very distinct style of their own. YEN illustrates news events and their related visual elements. The elaborately rendered Unbridled #2, in the vein of Chinese landscape painting, depicts a very well known news event - "nude BBQ party in the mountains." In contrast, Huang Hai-Hsin simulates daily life imagery, news media, and official propaganda in free, child-like and colorful style. Amuse Ourselves to Death depicts the excessive indulgence of the pleasure generation who experiences a sense of crisis, dismay, and loss of control.

The eight female artists range in age between 26 and 35. Although none of their work shows notable feminist ideas or gender awareness, the unique sensitivity and feminine qualities are naturally ingrained. As Woolf said, "every secret of a writer's soul, every experience of his life, every quality of his mind is written large in his works", these artists relate their concerns to contemporary issues in their life in each their own ways.