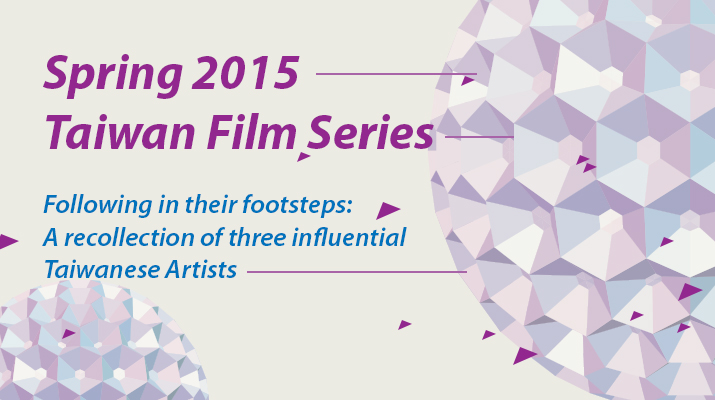 It is our pleasure to announce that Taiwan Academy of TECO in New York will launch its 2015 Taiwan Film Series with the title “Following in their footsteps: A recollection of three influential Taiwanese Artists”, which includes 1 feature film and 2 documentaries as follows:

On May 28th will be screened the documentary, The Sudden Recollection of “Taipei People”. It is about Pai Hsien-Yung, a writer of modernism literature in Taiwan. He has published more than a dozen literary works. His writing career started with his first collection of short stories, Fallen Immortals, followed by well-know works like Taipei People, Wandering in a Garden, Waking from a Dream, and Crystal Boys, etc. His works combine essence from traditional Chinese and modern Western novels and the depiction of ordinary people piece up a picture of the sorrow, joy, separation and reunion of humanity in extraordinary times. The way he presents human nature is impeccable. His original and artistic writing style sets an example for modernism literature in Taiwan.

Mr. Pai has been promoting Kunqu theater in recent years. The art form exemplifies the lyric, impressionistic, and poetic elements of traditional Chinese aesthetics the best. Pai transformed Kunqu and brought the form to a new level. Young Lovers’ Edition of Peony Pavilion represents the revival of Kunqu and was premiered in Taipei, followed by two hundred performances in the next few years. The Peony toured around Taiwan, China, USA, UK, and Greece and was highly praised. This is the best example of the excellence of this cultural achievement.

Pai Hsien-Yung was the National Cultural Award Laureate. The Executive Yuan National Cultural Award is a lifetime achievement award that honors those who have made special contributions to the maintenance or enhancement of culture, and is the highest honor for an individual in cultural circles of Taiwan. Since the award was established by the Executive Yuan of Taiwan in 1980, more than 70 artists have been honored in fields such as education, literature, cinematic, art and dance, etc.