Home
EVENT
3 Taiwanese Films at the 2015 TIFF: The Assassin, Murmur of the Hearts, and Afternoon
AAA
FB google plus email 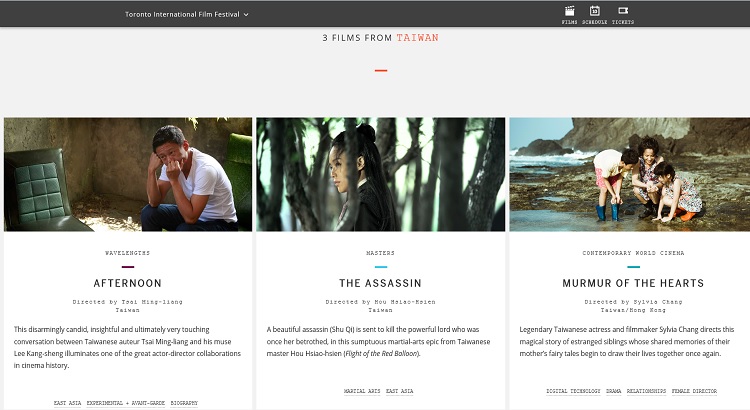 The 40th edition of the Toronto International Film Festival is running from September 10th to 20th in Toronto, Ontario, Canada. 3 Taiwanese films are featured at this year’s festivall, including Hou Hsiao-hsien’s The Assassin, Sylvia Chang (Ai-chia Chang)’s Murmur of the Hearts, and Tsai Ming-liang’s Afternoon. Taiwanese director Sylvia Chang will be attending the festival as a special guest as well.

As one of the most prestigious film festivals in North America, TIFF is often considered as Oscar prognosticators. Despite its non-competitive nature, TIFF has high reputation for its collection of the best films from film festivals around the world. During the past 3 years there were only 4 Taiwanese films featured at TIFF: Tsai Ming-liang’s Stray Dogs and Journey to the West, Chung Mong-hong’s Soul, and Chang Jung-chi’s Partners in Crime. This single year Taiwan is participating in this festival in 3 films, which shows the thriving and diverse development of Taiwanese films.

These 3 Taiwanese films at the 2015 TIFF are supported by the Ministry of Culture of the Republic of China (Taiwan), and co-supported by the Taipei Cultural Center in New York and Taipei Economic and Cultural Office, Toronto.

Part of the Masters Programme

The film is set during the mighty Tang Dynasty-period in Chinese history. Nie Yinniang returns to family after several years in exile. The mission of her order is to eliminate the tyranny of the Governors who avoid the authority of the Emperor. Now she will have to choose between sacrificing the man she loves, or break definitively with the “order of the Assassins”.

--Murmur of the Hearts (Nian Nian)

An artist reunites with her brother after the two were separated years ago when she left Liudau, an island off of Taiwan. Mapping how a painter, her boxer boyfriend and her tour-guide brother make their bumpy passage through adulthood, “Murmur of the Hearts” is suffused with elegiac yearning.

Part of the Wavelengths Programme

The shared filmography of Taiwanese director Tsai Ming-liang and actor Lee Kang-sheng represents one of the great collaborations in cinema history, a body of work on par with that of Scorsese and De Niro, Fassbinder and Schygulla, or Bergman and Ullmann. From his 1992 debut Rebels of the Neon God to his recent masterpiece Stray Dogs, Tsai has not made a single feature without Lee — and he has no plans to. An extremely personal film from this most personal of filmmakers, Afternoon traverses the breadth and depth of the two friends' creative relationship over the course of a single wide-ranging conversation.