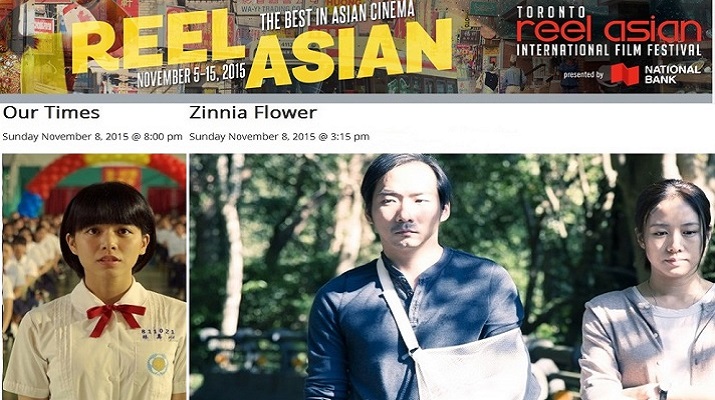 As Canada’s largest Asian film festival, the 2015 Toronto Reel Asian International Film Festival is going to present the highest-grossing film of the year in Taiwan OUR TIMES and the nominee of the 52nd Golden Horse Awards ZINNIA FLOWER from November 8 through 10.

The director of OUR TIMES, Frankie Chen Yu-shan, will be attending the post-screening discussions and the Artist Talk to talk about the challenges that women face in the film and television industries. Frankie Chen has produced over twenty hit Taiwanese dramas, including Fated to Love You (2008) and Prince of Lan Ling (2013). OUR TIMES is her directorial debut.

In present-day Taipei, Truly Lin (Joe Chen) is in her thirties and stuck in a dead-end job. She cannot help but recall her high school romance. The younger Lin (Vivian Sung), is a plain, clumsy girlwho spends her days goofing around with friends and fawning over the most popular boy in school, Ouyang (Dino Lee). An unfortunate incident leads Lin to become an errand girl for the school’s much- feared troublemaker Taiyu (Darren Wang). It doesn’t take long, however, before Lin sees Taiyu for who he really is: a kind, smart, young man. As their friendship evolves, Lin and Taiyu both realize that something more than friendship is budding between them.

On the same day, in the same accident, twin tragedies: Wei (Stone) loses his pregnant wife while Ming (Karena Lam) loses her fiancé. Intercutting between two parallel storylines, the film follows the one hundred day journey that Wei and Ming each embark on to mourn for the dead. Sharing unbearable pain, Wei and Ming each have their own ways of saying goodbye and coping with loneliness. Through virtuosic cinematography and set to the timeless rhythms of Chopin, the film invites us to meditate on life, loss and death.