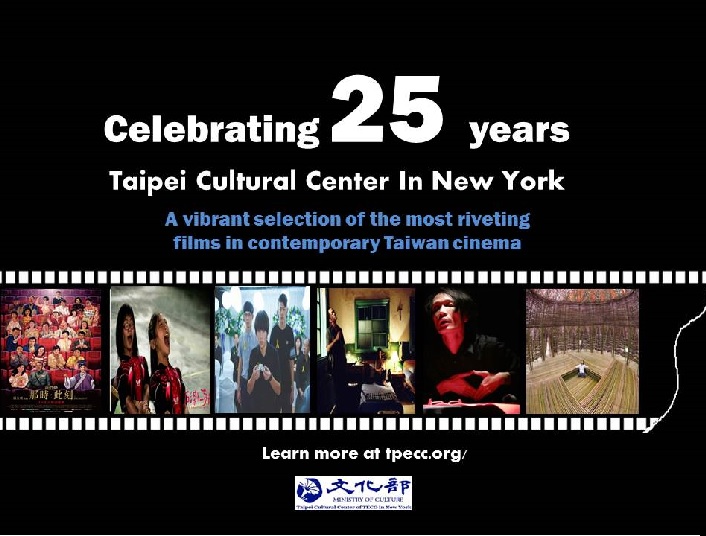 Taipei Cultural Center in New York celebrates its 25th anniversary by presenting a selection of the most riveting films by some of the most exciting voices in contemporary Taiwan Cinema, including Dir. Yang Li-Chou, Chen Singing and Chang Jung-Chi. This series showcases 4 documentaries and 2 features, from history documentary and artist documentary to detective feature and gripping dramatic feature, exploring the issues of the Taiwanese contemporary art, cinematic history and modern social development. With Dir. Yang Li-Chou and Dir. Chen Singing appearing in-person with New York premieres of their work, the Taipei Cultural Center invites you to join us in celebrating our 25th birthday with this vibrant film series!

In 2013, the Golden Horse Film Festival celebrated its 50th anniversary. The Ministry of Culture commissioned Director Yang Li-Chou to make a documentary about the history of Golden Horse Awards. What is unique to this film is that it’s not an ode to celebrities but about the role cinema plays in ordinary people’s lives. It’s a love letter to cinema, filmmakers and audiences.

8th August 2009. The flood caused by a typhoon destroyed Jiaxian, a small town in the mountains. It had once been a popular tourist attraction known for its local produce, but its vitality was completely lost in the catastrophe. Nonetheless, despite the lack of proper shoes, tracks and other equipment, a group of children in Jiaxian Elementary School fought to bring the highest honor to their hometown in the tug-of-war games. They tried to regain the self-confidence and courage lost in the disaster. The courage and spirit these young tug-of-war players demonstrate inspired the adults whose faith was swept away by the flood.

An ordinary day in an ordinary campus, until a girl who was loved by everyone kills herself. Everyone is asking why, but no one knows the truth, except three students: the good, the bad and the weird. They know why, and decide to do something out of the ordinary as a means of revenge. They are partners in crime. A Double Edge Entertainment release.
Please RSVP here

Ching, a depress hand model, tries to release herself from the pain of losing a newborn baby, but neither religious belief nor random affairs can help her. Her husband is an architect, deeply involved in the power/money games of real estate business. This urban middleclass couple’s marriage is in crisis, so they go on a trip to eastern Taiwan, hoping to redeem their relationship. An aboriginal couple, Biung and Mei, toils to live a poor life, transporting top-grade peaches between a remote tribe in Taidon and Taipei City every day. Yet they find themselves less valued than even the peaches. Their daughter Savi leaves home for Taipei to rebel against her alcoholic father, and now devotes herself to boxing. One-legged Yellow Bull drives a truck, filled with deserted god statues of various sizes, roaming around to pick up and shelter more. A homeless boy accompanies him, collecting all sorts of amulets to earn blessings. The two live on the road. Then there’s a fatal car accident caused by a stray dog. The lives of the three groups of characters converge and their lives are changed as a result.
Please RSVP here

Acclaimed artist Wang Wen-Chih has been taking part in various international art festivals in recent years. He represented Taiwan at the 2001 Venice Biennale. Using the natural materials of bamboo, rattan, and wood to express a profound serenity, and drawing on his memories of growing up in the mountains, Wang’s work displays both a unique vision and style in contemporary art. The directors follow in Wang’s footsteps as he gathers his material deep in the mountains, travels to Niigata and Shadoshima in Japan to construct his work, and while he mediates his creation. This documentary captures Wang’s attitude to life and his passion for nature in which both the work and the artist himself evoke the spirit of the mountain.

“You can close your eyes but never the ears.”

Ears Switched Off and On is the attempt to track downs the Taiwanese sound art context, those active, off-mainstream but ignored artists: Dino, Wang Fu-jui, and LIN Chi-Wei. This documentary, which is still an on-going project, delineates these pioneers who have been devoted to sound art since the 90’s.