Home
EVENT
NYPL for the Performing Arts presents Singing Chen's Mountain Spirits and Ears Switched Off and On, Oct 20 and 22
AAA
FB email 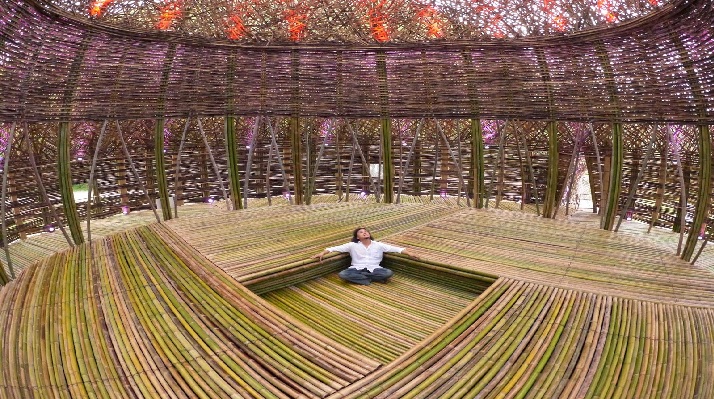 Taipei Cultural Center is delighted to announce the collaboration with the New York Public Library for the Performing Arts to present the final screenings of our 25th anniversary film series: MOUNTAIN SPIRITS and EARS SWITCHED OFF AND ON by the rising Taiwanese director Singing Chen.

Mountain Spirits is the documentary about the Taiwanese acclaimed artist Wang Wen-Chih who has been taking part in various international art festivals including Venice Biennale in recent years. Using the natural materials of bamboo, rattan, and wood to express a profound serenity, and drawing on his memories of growing up in the mountains, Wang’s work displays both a unique vision and style in contemporary art. This documentary captures Wang’s attitude to life and his passion for nature in which both the work and the artist himself evoke the spirit of the mountain.

“You can close your eyes but never the ears.”Ears Switched Off and On is the attempt to track downs the Taiwanese sound art context, those active, off-mainstream but ignored artists: Dino, Wang Fu-Jui, and Lin Chi-Wei. This documentary delineates these pioneers who have been devoted to sound art since the 90’s.

Singing Chen is amongst the most talented young directors in Taiwan, recognized for her highly stylized approach. Her films convey far-ranging observations of contemporary society and the environment, with penetrating depictions of characters and life situations. She uses magical realism to express the absurdity of contemporary society in order to expose its larger structural issues. Her tightly structured narratives develop subtle emotions and capture a unique humor.

About the artists
Wang Wen-Chih:
Wang Wen-Chih is well-known contemporary artist in Taiwan, famous for his bamboo sculpture. His work shows a unique vision that fuses the tactile qualities of hand-crafting and labor into contemporary art. His creative method is spontaneous and direct, with a boundless energy derived from the landscape in which he was born. Bamboo is an important material for him. By using its strength and flexibility he creates grand sculptures reminiscent of painting, landscape design, and construction. His work contains the imaginary of Asian culture and creates the space to hold spiritual dialogue with the spectator.

Dino:
Dino (Liao Ming-he) is a sound artist, guqin (anancient stringed Chinese musical instrument) maker and performer based in Taipei. Once a bassist of the Clippers Band, he is a seminal figure in the second wave of the noise movement in Taiwan during the late-1990s. He uses simple analogue equipment to create electronic sound with no input, which is known as ‘recycle music’, by generating loops from circuitry noise, static, or microphone feedback. In recent years, Dino participates in experimental films and live music production for the theatre. He was awarded Best Sound Effects in Taipei Film Festival (2003).

Wang Fu-Jui:
As one of the pioneers of sound art in Taiwan, Wang Fu-Jui founded NOISE, the Taiwan’s first independent label and ‘zine focusing on experimental sound in 1993. NOISE has established significant connections between the emerging noise scene in Taipei and abroad in particularly during the 90s. In 2000, Wang joined ETAT Lab, and initiated BIAS Sound Art Exhibition and Sound Art Prize in the Digital Art Awards Taipei. Over the last decade, while continuing his practice in sound and digital art creation, he has also been leading the new generation of young digital artists through his public programmes. Since 2008, Wang has been curating and promoting the annual Digital Art Festival Taipei. He has served as the curator for TranSonic Sound Art Festival. He is currently the Head of the Trans-Sonic Lab in the Centre for Art and Technology at Taipei National University of the Arts.

Lin Chi-Wei:
Lin Chi-Wei, who has received training in literature, anthropology and fine art, creates sound works with the participation of the audience. As a major figure in the underground scenes in Taipei during the early 1990s, Lin was the co-founding member of Zero and Sound Liberation Organization (Z.S.L.O.), the first noise group in Taiwan. He also co-organized Taipei Broken Life Festival which marks the highpoint of the local noise movement. Since the late-1990s, Lin has been exploring in the realms of folklore culture, and through his work, integrating sound, ritual and the participation of the audience. In his Tape Music series, he creates a live concert situation where he positions the audience in a live concert situation with a special arrangement that resembles to the synthesizer circuit, thus creating a mechanism which enables a kind of hyper-humanized electronic sound.