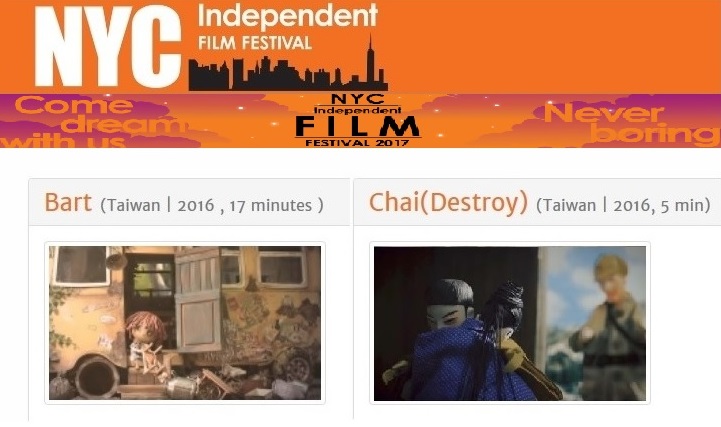 Taking place May1st–May 7th, 2017, this year's NYC Indie Film Festival showcases a lineup of over 250 films from over 30 countries, including two incredible animated works from Taiwan, Chai (Destroy) and Bart, which will be presented on May 4th and May 6th at The Producers’ Club.

Bart, also selected by ATHENS ANIMFEST 2017 and nominated by the Golden Horse Awards 2016, tells a story of the Orphan girl Bart who survives by living in abandoned van collecting garbage. One day she brings the garbage dolls magically back to life. The cruel Town of Wonders mayor burns out Bart and her garbage friends, who sacrifice themselves for Bart. Lonely and desperate, Bart strikes to avenge.

Taiwanese band CHANG AND LEE’s music video Chai (Destroy) is also selected for this year’s edition of NYC Indie Film Festival after it has been nominated for Best Lyrics at the Golden Melody Awards 2016, the biggest Taiwanese music award, featuring mandarin pops and bands across Asia. The story behind this song exactly reflects those that have dwelt in Taiwan for most of their life, trying to find out the most faithful affections within this vulnerable life.

Celebrating its 8th anniversary this year, the NYC Indie Film Festival will be screening the best indie films and offering panels, classes, seminars and discussion groups as well as opportunities for the filmmakers and fans to mingle and network. This year’s festival runs from May 1 to 7, 2017 at The Producers’ Club. Visit nycindieff.com/ for more information.