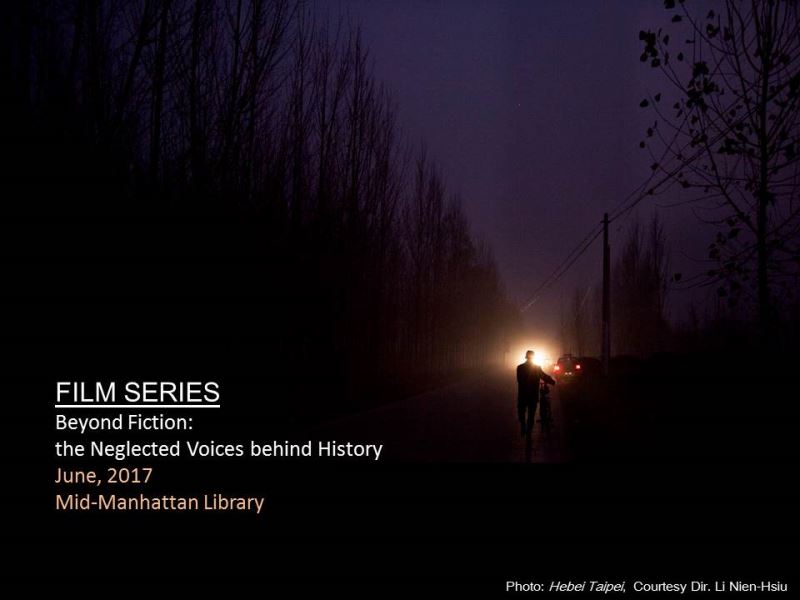 Film Series
Beyond Fiction: the Neglected Voices behind History

Taipei Cultural Center in New York is celebrating Taiwan Culture Month with the film series entitled Beyond Fiction: the Neglected Voices behind History, running at Mid-Manhattan Library on Sundays of this June.

This four-film series goes beyond fiction to introduce a selection of titles exploring the neglected voices behind contemporary Taiwanese and East Asian society and history. The series includes the award-winning biography documentary Hebei Taipei about a former soldier who survived the Chinese Civil War and lived with nostalgic memories for the rest of his life, After Spring, the Tamaki Family about a Taiwanese immigration history in Okinawa Japan, Absent Without Leave revealing the hidden past of the Malaysian Communist Party members, and Taiwan’s official Oscar entry, Hang in There, Kids, portraying 3 aboriginal boys who grapple with family struggles and life as aborigines in Taiwan.

Delving into personal life stories as well as family memories, these films not only provide social context for a single person or family on their journey back home but also display the wide-ranging imagination of Taiwan’s historical complexity as far greater and more varied than mainstream histories might suggest. All films are New York premieres. Free admission.

Li, a former soldier born in Hebei China, joined the army as a young man in order to survive. The war brought him to Taiwan, where he lived for six decades, and often dreamt of home. At the age of sixty, he decided to separate from his family, having no idea how his eventful life would come to an end…

The Tamaki family emigrated from Taiwan before World War II and became the largest Taiwanese immigrant family in Okinawa where they were political refugees under the 3-decade U.S. occupation. This is a film spanning 80 years about how a family waded through and survived in the tide of the vicissitudes of East Asian history.

The story begins with a portrait hanging in a family home in Malaysia. The director sets out on a journey to discover the secret history of his country through the eyes of his grandfather.

This film is about the long journey of three kids, raised in an isolated tribe in the mountains, who decide to set out on their own to help their beloved paraplegic teacher fulfill her dream.