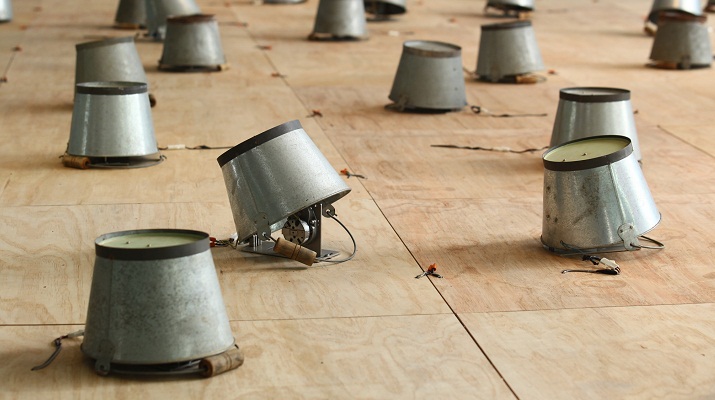 Beginning May 1, The Bronx Museum of the Arts will present Shyu Ruey-Shiann’s kinetic installation One Kind of Behavior at its North Wing second-floor terrace. With dozens of same-sized steel buckets scattered on the floor, One Kind of Behavior will transform the spacious terrace into a vibrant, playful and intriguing landscape. This exhibition is sponsored by the Ministry of Culture, R.O.C. (Taiwan) and it will be on view through August 17, 2014.

Upon entering the terrace, one's auditory perception is immediately stimulated by the sound of clashing metal. Random reverberation captures the space. Viewers are greeted by dozens of metal buckets, each undulating to its own unique rhythm. Shyu works with different material and media to explore themes related to our environment. The installation One Kind of Behavior is inspired by the quasi-mechanical movements of creatures like hermit crabs. The artist sees within the landscape of nature, languid movements of opening and closing of the hermit crab's shells, a stark contrast to contemporary society where things move at high speed. The fact that hermit crabs occupy shells discarded by other species is another source of interest to the artist, who sees in this special relationship a metaphor for our human condition. Contrasting man and animal behavior, One Kind of Behavior asks us to consider our environmental and the consequences of our actions on nature.

Shyu Ruey-Shiann was born in Taipei, Taiwan, in 1966, currently lives and works in New York and Taipei. Shyu is one of the pioneering artists in Taiwan’s contemporary kinetic art movement. In the first ten years of his art education Shyu focused on academic western paintings and sculptures. In 1993, he began his studies at Aix-en-Provence Art College, in the south of France. His interest in man-made objects and mechanical movements in this period led the path to the exploration of non-traditional media and machine-oriented art. When he returned to Taiwan in 1997, endowed with hands-on knowledge of modern art and contemporary theory, kinetic art became the cornerstone of his creativity and the chosen language in expressing his visions on life, memory, and issues on social and political concerns.

A documentary film “Making Techno Art out of Rubbish—Shyu RueyShiann” focuses on Shyu’s art career, life and families, was made by director Huang Mingchuan and published by Taiwan Public Television in 2006.