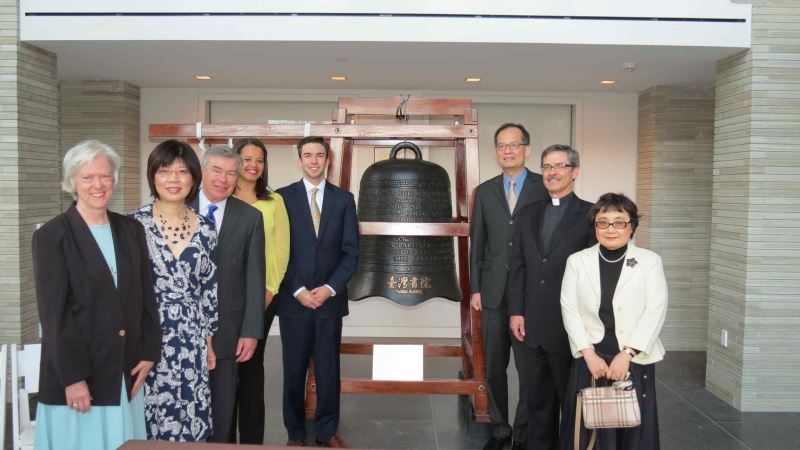 The Taipei Economic and Cultural Office in New York presents the bell in a dedication ceremony at the University’s Loyola Science Center on Thursday, May 1, at 4:30 p.m. The University is the only higher education institution in the world to receive a replica of the Kinmen Peace Bell.

The bell was formally presented to the University by Ambassador Paul Wen-liang Chang, director general of the Taipei Economic and Cultural Office in New York. He noted in his remarks that this bell symbolizes Chinese characteristics such as peace and freedom. The bell itself is engraved with the word “peace” in more than 100 languages. As a national gift it is a significant gesture from Taiwan, it is in honor of the University’s charter membership in the Taiwan Academy and its success with its Taiwanese cultural programming and Asian Studies program.

The original bell was dedicated in 2011 in a ceremony on Taiwan’s Kinmen Island. The bell is more than six feet high and weighs about 1,100 pounds. It is cast from copper and metal from artillery shells fired upon that island by China’s People’s Liberation Army. Kinmen was the site of an intense 44-day battle in 1958, during which China fired more than 450,000 artillery shells upon it, killing 2,600 people.

The Loyola Science Center will be a temporary location for the bell. Dr. Pang-White said University officials plan to erect an outdoor structure with Asian architectural elements to house the bell at a location on campus yet to be determined.

The University’s relationship with Taiwan began in the fall of 2010 with a Taiwanese film festival and art exhibit. Since then the school has hosted a Chinese opera performance, a Taiwanese chamber music concert and master class, a second film festival, a poetry and literature event and a puppetry performance and workshop, in addition to hosting two visiting Chinese Mandarin instructors from Taiwan supported by a grant and participating in scholarship and fellowship programs.

The success of such programming is part of the reason the University was chosen to receive the peace bell, Dr. Pang-White said. The University is one of 88 higher education institutions around the world that are members of the Taiwan Academy, an organization that promotes Taiwanese studies and cultural exchange.