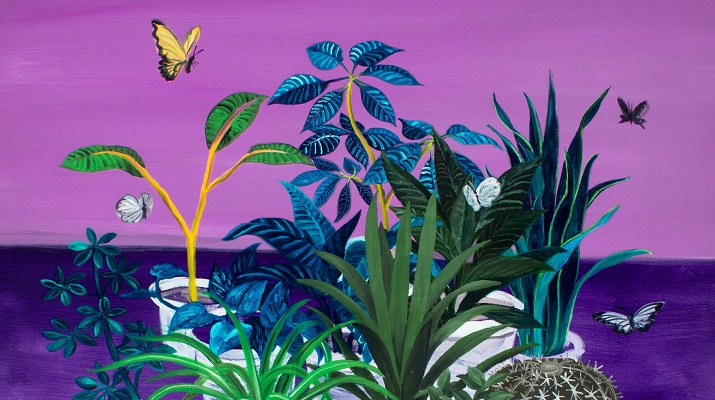 Taiwanese artist Huang Hai-Hsin’s 2015 Solo Exhibition is on view at 548 W28th Street, #636 in New York. Huang’s deeply psychological and perceptive works distill elements from everyday scenes, and reanimate them in wonderfully twisted arrangements of humor, awkwardness and felt imagination uniquely conducive to painting. These small, curious pockets of narratives expand and implode without consideration for resolution, and never lose touch with their roots in observation and reality.

Huang cites Luc Tuymans, Balthus, Munch and Hopper as critical inspirations, and employs a striking palette that is often exaggeratedly saturated and somewhat jarring. Her early works were influenced by source images such as vintage photograph and digitally compressed online thumbnails; she later abandoned her attempt to simulate the ghostly haze of aged photos with paint, and her newest work is a bright suite of seemingly simple moments, articulated with brash and decidedly in-focus brush strokes. They document the plentiful, often overlooked possibilities of absurdity that make up and enliven modern society, a world that is no longer sensible to be measured against one continuous frame of logic.

Household plants in her paintings (exotic and otherwise) boast solid, weighty leaves and bodies, while their weak and translucent ceramic containers are sometimes reduced to sheets of sheer, flat washes beneath a hovering rim. Leisurely butterflies flutter about in these flower-less, indoor canopies. ln “Field Trip”, a clumsy queue of Simpsons-yellow, slightly mad people in tourist uniforms is linked by arms in the shape and scale of elephant trunks as it charges into a forest of potted flora. Elbows smash against domesticated aloe vera over a bed of pink tiles, supervised by birds reaching towards Mount Fuji. Each person is stifling the eyes of someone directly in front as if to ensure the enjoyment of a surprise -- perhaps the last one in line is the winner of the most informed vantage point, comparable to that of the viewer.

Born in Taipei, Taiwan, 1984. Huang received her BA degree from National Taipei University of Education in 2007. She went on to receive a MFA degree form School of Visual Arts in New York, 2009. Since graduate school, Huang has been living and painting in Brooklyn. Huang is interested in the ridiculousness and fear in society, the absurdity and the loneliness. As part of a generation marked by hedonism, people seem to know more but feel less. Catastrophes become assumptions; we practice suffering and crisis with laughter. Huang tries to highlight the lives of  this easy and comfortable generation, and in particular, their lightness of being. Huang’s work has been exhibited and collected at museums and galleries in New York, Kyoto, Sydney and multiple cities in Taiwan including ISE Cultural Foundation, White Rabbit Collection, Kyoto Cultural Center, Kuandu Museum of Fine Arts, and Taipei Fine Arts Museum. Huang got “Honorable Mention” prize at 2011, Taipei Arts Award, “Finalist at “Amuse Art Jam” at Kyoto Culture Center, 2008; and she had participated in several artist residency programs include ISCP, New York, and Vermont Studio Center in USA in 2013.
Back
返回頂端
關閉選單
Keywords: 文化部
fb youtube mail