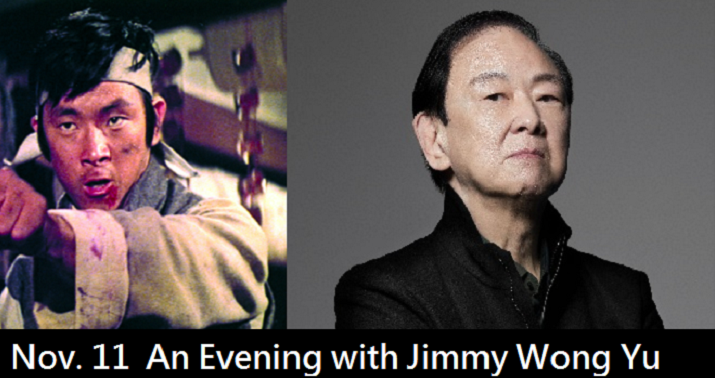 Taipei Cultural Center of TECO in New York is pleased to announce “An Evening With Jimmy Wong Yu” will be held on November 11. It is co-hosted by
The Film Society of Lincoln Center and Subway Cinema and will be held at the Walter Reade Theater.
Schedule
5:30pm Reception
7:00pm Lifetime Achievement Award presentation and an on-stage conversation with Wong Yu
8:00pm MASTER OF THE FLYING GUILLOTINE
(1976, 93min, in Mandarin with English subtitles)
For tickets, please visit http://www.filmlinc.com

The legendary Taiwanese actor will be presented with the New York Asian Film Festival’s esteemed Lifetime Achievement Award and participate in an on-stage conversation prior to the screening of his 1977 masterpiece Master of the Flying Guillotine in 35mm.

In the 1960s the Shaw Brothers were looking to expand from their more traditional dramas and romances to martial-arts films, and one of their hires was a former water polo champion, horse rider, and car racer: Jimmy Wong Yu. Appearing in films like Temple of the Red Lotus, Twin Swords, Magnificent Trio, and Tiger Boy at the beginning of his career, his true breakthrough came in Chang Chen’s landmark The One-Armed Swordsman (1967), the film that launched Wong Yu’s career as well as the martial-arts sword-fighting movie (wuxia pian) craze. With all the fury and intensity exploding from the screen, Jimmy Wong Yu became the prototype for the tough stoic masculine characters that this new wave of sword-fighting films brought to the screen.

If The One-Armed Swordsman launched Wong Yu into stardom, it was The Chinese Boxer (1970) that cemented his legendary status by igniting the kung-fu fever that was to become a global phenomenon. Written and directed by and starring Wong Yu, The Chinese Boxer was the first major movie to devote itself entirely to the art of kung fu. It established the basic conventions, such as revenge as a motive, Chinese martial arts versus Japanese martial arts, and strong nationalistic feeling, all of which later found their way into the films of Bruce Lee. Following this movie, Wong Yu broke his contract with Shaw Brothers and started making films in Taiwan with Golden Harvest, including his masterpiece Beach of the War Gods (1973), described by scholar Stephen Teo as “the sword-fighting movie to end all sword-fighting movies.”

Wong Yu is currently enjoying an Indian Summer in his long career, with juicy roles in Peter Chan’s Wu Xia (aka Dragon, 2011), and Andrew Lau’s The Guillotines (2012). Most recently, he starred in Chung Mong-hong’s arty slasher Soul (2013), turning it into a showcase for his acting talent—with hardly a change in facial expression, he’s able to summon up a whole range of emotions (sadness, paternal love, madness).

With a career spanning over five decades, he has acted in over 80 films, directed 12, and left an indelible mark on the history of martial-arts cinema.

An Evening with Jimmy Wong Yu will be held at the Film Society of Lincoln Center's Walter Reade Theater (located at 165 West 65th Street, between Amsterdam Avenue and Broadway).