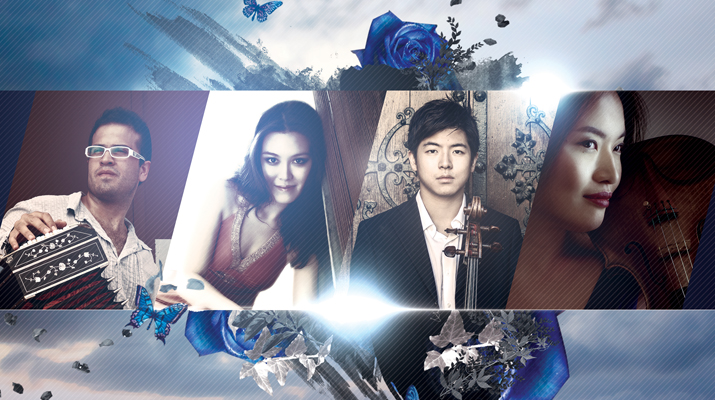 JP Jofre
Argentinean Bandoneón player-composer JP Jofre has been repeatedly highlighted by the New York Times and praised as one of today’s leading artists by Great Performers at Lincoln Center. A recipient of the National Prize of the Arts grant in Argentina, Mr. Jofre has taken his form of contemporary tango to some of the most important venues in Asia, Europe, America and the Caribbean as soloist and composer. He has collaborated with many famous musicians in a wide range of musical styles, including Paquito D’Rivera, Gloria Estefan, Symphony Silicon Valley, Sacramento Philharmonic, Philippe Quint, Fernando Otero, Westchester Jazz Orchestra, Fred Sturm, Frost Studio Jazz Band, Borislav Strulev, and Nina Beilina. Mr. Jofre has received commissions and been part of many prestigious festivals including the Umbria Jazz Festival, Great Performers at Lincoln Center, Seattle Town Hall’s Global Rhythms, Belgorod Music Festival, Sudtirol Jazz Festival, Celebrity Series of Boston, American Virtuosi, and Bachanalia Taiwan.
Jofre’s first CD features 11-time Grammy-winner Paquito D’ Rivera, who recorded “Primavera,” an original composition by Mr. Jofre. For the world premiere of his bandoneón Concerto, the Mercury News wrote: “…he is an electrifying composer- bandoneón player.” In 2012, Jofre was invited by the Free University of Bolzano (Italy) to perform for the homage to Argentinean Nobel Peace Prize winner, Adolfo Perez Esquivel. JP Jofre proudly uses the new “AA” bandoneón by BandionFabrik Klingenthal.

WEIYIN CHEN
In a time of promising young virtuosos from all over the world the Taiwanese-American pianist Weiyin Chen stands out not just for her dazzling technique, but above all for the sheer musicality and maturity of her playing, qualities rare in an artist of her young years. Her gift for getting to the musical “heart” of the scores she plays has drawn the attention and praise of such master musicians as the renowned conductor-pianist Leon Fleisher and pianists Richard Goode and Claude Frank, all of whom she studied with extensively, among a legion of other notable figures. Ms. Chen is a “thinking pianist” who has a rare ability to look beyond the notes on the page to divine a score’s musical essence.
Ms. Chen has performed as soloist with most of the major orchestras in Asia, including the Hong Kong Philharmonic Orchestra—with whom she made her debut under Maestro Edo de Waart—and the China National Symphony Orchestra. An accomplished chamber musician, Ms. Chen has participated in such festivals as La Jolla Summerfest, Verbier Festival & Academy, Festspiele Mecklenburg-Vorpommern, the Sarasota Music Festival, and the Banff Center, collaborating with such instrumentalists as violinists Cho-Liang Lin, Ilya Gringolts, Chee-Yun Kim, David Chan, Alina Pogostkina, violists Paul Neubauer and Cynthia Phelps, and cellist Gary Hoffman.
A highlight of Ms. Chen’s engagements for 2012-2013 included performances of the Brahms First Piano Concerto with the National Taiwan Symphony Orchestra under the baton of Leon Fleisher, who traveled to Asia expressly for these concerts, as well as a gala concert with the Taiwan Philharmonic NSO and a North American recital tour.

Nan-Cheng Chen
Cellist Nan-Cheng’s performance was recently described as “personable and smile-inducing, with fine playing” by Washington Post in 2014 and “Beautiful Tone” by New York Concert Reviews in 2011, award winning cellist Nan-Cheng Chen is passionate about sharing music with music lovers. At age of 25, Nan-Cheng is the executive director and founder of the New Asia Chamber Music Society (NACMS), a member of Sonic Escape, and many other active music ensembles around the world. An active soloist, Nan-Cheng has collaborated with Simon Bolivar Orchestra, Queens Symphony Orchestra, Metro-West Symphony, Quincy Symphony and Symphony Pro Musica, which received a review that states: “It was the kind of performance one might hear live only once a decade”, from Worcester Telegram and Gazette. In the 2013-14 season alone, Nan-Cheng performed in more than 20 states and provinces throughout North America, as well as world-wide concert tours in Panama, Hungary and Austria. Nan-Cheng hold a B.M. and M.M. from The Juilliard School.

Tien-Hsin Cindy Wu
Violinist/Violist Tien-Hsin Cindy Wu enjoys a versatile career as a soloist and chamber musician throughout North America, Europe and Asia. Having appeared as a soloist with orchestras including the Russian State Symphony Orchestra, National Symphony Orchestra of Taiwan, Wu has also collaborated in concert with Gary Graffman, Kim Kashkashian, Ralph Kirshbaum, Ani Kavafian, Ida Kavafian, Midori, William Preucil, Thomas Quasthoff, and members of the Alban Berg, Brentano, Guarneri, Orion, and Tokyo string quartets at prominent venues as the Metropolitan Museum, Kennedy Centery, Library of Congress, Carnegie Hall, and festivals as the La Jolla Summerfest, Bridgehampton Chamber Music Festival, Music@Menlo, Santa Fe Chamber Music Festival, and the Marlboro Music Festival.
Among Wu’s many honors and awards include the third prize in the David Oistrakh International Violin Competition. In 2008, she received her bachelor degree from the Curtis Institute of Music and was awarded the Milka Violin Artist Fellowship. In 2010 she graduated from the Thornton School of Music of University of Southern California, and the following fall, she had joined the faculty of the Thornton School of Music as an adjunct instructor on violin and chamber music.
Wu performs on a 1734 Domenico Montagnana violin.