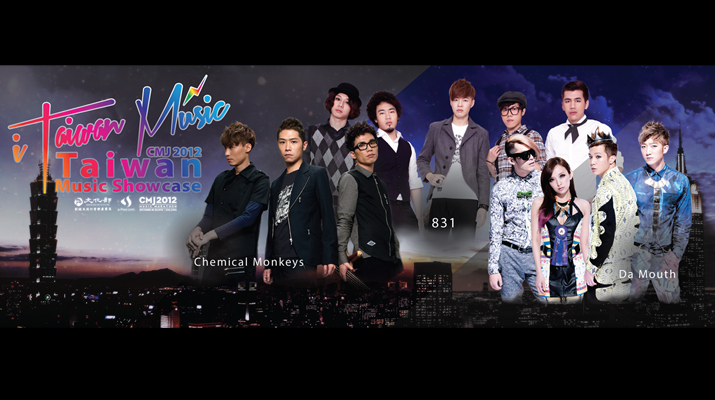 In this year’ CMJ music marathon, three top groups from Taiwan will be performing on Thursday, October 18th, from 8:00-10:15pm, at Union Square Ballroom (27 Union Square West)(Free admission). The performers include successful pop-rock band, Chemical Monkeys; two-time winner of the Golden Melody Award, hip-hop band Da Mouth; and alt/punk- rock sensations, 831. All three bands, while specializing in different genres of music, represent the new and exciting work that is currently being produced in Taiwan.

In addition to their performance, the members of all three bands will be at NYU’s Kimmel Center (60 Washington Square South) on the mornings of October 16-18 from 10:00-11:00am to meet with the public. Their appearances will be curated by Jean Hsiao Wernheim and Ed Yen, executives at the famous Taiwanese A-peer Music Holding group.

Finally, on Friday, October 19th, there will be a CMJ panel discussion at the NYU Kimmel Center (60 Washington Square South, Room 405) from 3:30-4:30pm titled “Hitting the Digital Jackpot: China’s Trillion Dollar Music Platform.” The panelists, which will include Ms. Wernheim and Mr. Yen, will discuss the potential of the Chinese market for the music industry, how Taiwanese and other artists are influencing what music is heard in China, and a possible innovative business models for the global music market. For more information, please visit: http://cmj2012.sched.org/event/f43100529ea8870661a12d08e7a56a60

While Taiwan Night is free and open to the public, both the bands’ appearances at the Kimmel Center and the CMJ panel discussion require attendees to have CMJ Passes.

For more information, please to go to the official CMJ website: http://www.cmj.com/marathon/

More information on the bands:

Chemical Monkeys is a Taiwanese pop rock band established in 2008. All members have worked in the pop music industry for years as songwriter, producer and/or recording engineer. They released the self-titled debut studio album in 2010, which received wave reviews. Their second studio album “Right By Your Side” is recently released this year.

Da Mouth is a two-time Golden Melody Award-winning Taiwanese hip-hop group. They are considered “the Asian Black Eyed Peas” due to their diverse backgrounds and widespread popularity.

831 is a Taiwanese alternative rock band formed by five high school classmates in the summer of 2003, best known as the future successor of the top Mandarin Rock band, Mayday. 831 are also sometimes referred to as “the Asian Simple Plan” due to their versatile styles of music ranging from punk rock, pop rock, electronic, metal to hip-hop.
Back
返回頂端
關閉選單
Keywords: 文化部
fb youtube mail