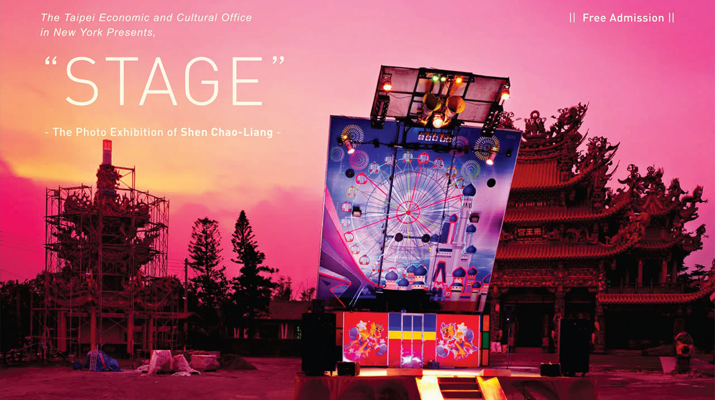 New York, New York - In celebration of the hundred-year anniversary of the founding of the Republic of China , the Taipei Economic and Cultural Office (TECO) in New York will present a photo exhibition by the noted Taiwanese photographer Shen Chao-Liang, entitled? Stage?. The exhibition is part of TECO?s program ?Window on Taiwan: Arts and Culture,? an effort to raise awareness of Taiwanese cultural arts overseas. It consists of 20 works to be displayed on the first and second floors of the TECO offices. The exhibition aims to give international artists and art-lovers an opportunity to appreciate this outstanding work of contemporary Taiwanese photography, say representatives of the Taipei Cultural Center of TECO, which is responsible for the programming.

Shen will be present at the opening to discuss the inspiration for his work and his personal experiences. He has long been interested in Taiwanese folkways and the lives of the lower class, and these works focuses on the unique Taiwanese tradition of traveling ?truck theaters.? Since the 1970s, itinerant cabaret troupes have traveled throughout the Taiwanese countryside, setting up their hydraulic folding stage sets in village squares, in narrow alleyways, on country roads and fishing piers. A quick and convenient method for delivering local entertainment, these temporary stages can be seen all over Taiwan. Their decoration is also uniquely Taiwanese: troupes adorn their stages with bright and imaginative patterns, creating riotously-colored collages of symbols both local and global.

Shen uses special techniques to photograph these stages, giving them a novel look. Using large cameras and long exposures, he captures the beauty of rural Taiwanese skies and ocean views, and of the stages? dazzling neon colors. Visitors can admire tangerine sunsets, chilling ocean blues, and views of the unique Taiwanese landscape. Shen?s knack for capturing changes in light lets him create fantastic, surreal atmospheres that convey a feeling of true locality.

Stage has been featured at the 2008 Deagu Photo Biennial in Korea; the 2009 GetXoPhoto Festival in Bilbao, Spain; and PHOTO TAIPEI 2009. In 2010 the exhibition toured Tokyo, Osaka and Taipei; it was awarded honorable mention in the 2010 Taipei Art Awards and won Shen invitations to the 2010 Dali International Photography Exhibition in China, the 2010 Taiwan Biennale, and the National Art Museum of China?s 2011 Cross-Strait Contemporary Art Exhibition.

Shen Chao-Liang was born in 1968 in Tainan, Taiwan. He obtained a master?s degree from the National Taiwan University of the Arts? Graduate School of Applied Media Arts, then worked as a photojournalist, a vice-convener at the Liberty Times, and artist-in-residence at National Central University. Since 1993 he has dedicated himself to feature photography, producing numerous photo series including Reflections of Nan-Fang-Ao (2001), YULAN Magnolia Flower (2008), andTsukiji Fish Market (2010).

Noted for his meticulous documentary style and his finely-made photo collections, Shen is widely recognized as a master of his field. His honors and awards include the Taiwanese Executive Yuan?s Golden Tripod Award for Best Photography (2000, 2002); the Asia Prize in the General Photography Festival at Photo City Sagamihara, Japan (2004); the Dong-gang Photography Award at the Dong-gang Photo Festival in Korea (2006); and Honorable Mention in the Taipei Art Awards (2010).

?Window on Taiwan: Arts and Culture? is a program sponsored both by the Ministry of Foreign Affairs, Republic of China(Taiwan) and Council for Cultural Affairs, Executive Yuan of the  Republic of China (Taiwan) designed to utilize the public spaces of Taiwan?s embassies and representative offices as a cultural window, providing a glimpse into the vitality and originality of Taiwanese arts and culture. The plan is carried out in New York by TECO and the National Taiwan Museum of Fine Arts.