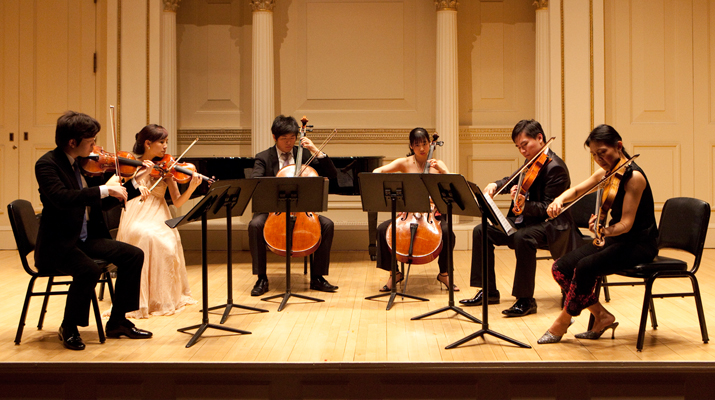 About New Asia Chamber Music Society:
Propelled by a shared passion for classical chamber music and profound respect for the works written by the composers of our time, the New Asia Chamber Music Society was founded in 2010 by an idealistic group of young Asian-American virtuosi, graduated from America?s most prestigious music schools, including The Juilliard School and the Curtis Institute.

Based in New York City, NACMS is committed to bringing audiences exceptional performances of the finest works of chamber music, drawn from the canon of western music as well as contemporary Asian culture. This unusual young collective also seeks to reach out to its technologically-wired peers around the world, through the creation of innovative new work in future partnership with other arts organizations.

About Hsin-Yun Huang, violist
Violist HSIN-YUN HUANG, recognized as one of the leading violists of her generation, came to international prominence in 1993 when she was winner of the top prize of the ARD International Music Competition in Munich and the Bunkamura Orchard Hall Award. In 1988, Ms. Huang was the youngest-ever Gold Medalist of the Lionel Tertis International Viola Competition on the Isle of Man. These and other honors have propelled a career as soloist and chamber musician on stages of major concert halls throughout North America, Europe, and the Far East.

Recent highlights include concerto appearances with the City of London Sinfonia; the Amarillo Symphony; the Naumberg Orchestra in New York City's Central Park and the Dalbavie Viola Concerto with the ICE a Miller Theater in New York City. George Benjamins Viola Viola with violist Misha Amory for Carnegie Halls Making Music series at Zankel Hall and a part of Elliot Carter's Celebration of his 100th Birthday at Zankel Hall. Other solo performances have included concerto appearances with the Bavarian Radio Orchestra in Munich, the Zagreb Soloists in Paris, the Tokyo Philharmonic in Tokyo, the Berlin Radio Symphony in Berlin, the Russian State Philharmonic, the National Symphony of Taiwan, the Taipei City Symphony and with the Evergreen Symphony Orchestra. Ms. Huang has collaborated with many distinguished artists, including Yo-Yo Ma, Jaime Laredo, Joshua Bell, Joseph Suk, Menahem Pressler to name a few. Recent collaborations include performances with the Guarneri, the Juilliard, the Orion, the Brentano and the St. Lawrence String Quartets.

Ms.Hunag currently residing in New York City, she is a dedicated teacher, serving on the faculties of The Juilliard School and the Mannes College of Music.

About Jay Wei-Chieh Lin, composer
Wei-Chieh Lin's compositions range from solo instrumental music to orchestral works to vocal and choral pieces, as well as Jazz and folk arrangements. Mr. Lin has received an ASCAP Morton Gould Young Composer Award and was a finalist for the Minnesota Orchestra Composer Institute. He has also won the 2009 and 2010 National Symphony Orchestra of Taiwan ?Call for Scores? competition in both the chamber music and the solo music divisions, as well as the National Taiwan Arts Education Composition Award and the Palmer Dixon Award from the Juilliard School.Mr. Lin has has completed his Bachelor of Music and Masters of Music with scholarship at The Juilliard School under the tutelage of Milton Babbitt and Robert Beaser, and he is now a C.V. Starr Doctoral Fellow in composition.

The concept of time, and, more precisely, "musical" time has fascinated me for the last few years. It is always interesting to me how a piece of music unfolds in time and its relationship to the way we perceive such process, which, coincidentally, contradict the actually experience of "musical" time. Music to me has the power to manipulate time, because even though a piece of music is bound by literal "clock time," the experience of "musical time" and the "flow of time" can be continuous/discontinuous or interrupted, running backwards, or even temporally static and frozen. In this piece, interruptions increasingly disrupt the flow of the music as it unfolds, and slowly these "interruptions" turned into larger musical gestures that are themselves interrupted by another gesture. Thus the form is rather elusive, ambiguous, and inconclusive. The opening transfixed texture serves as an important recurring motive that is constantly being redirected to different routes, and as it flows, it is slowly eclipsed by other music, until what is left is our mere imagination of what it might have become, or where it might allude to? xxx